AS nurses in the Mid-West prepare to ballot for industrial action in the new year, an Ennis councillor has hit out at the HSE over plans to move patients from the overcrowded emergency department at the flagship hospital in Limerick, to ‘clinical assessment’ rooms at the downgraded University Hospital Ennis.

Also, an Ennis man, whose 87-year-old mother was sent into University Hospital Limerick (UHL) to have a ‘racing-heart’ condition calmed down, has spoken of his horror at the conditions that she endured while she spent more than 57 hours on a trolley and a chair in a hallway and the “living hell” of patients and staff in the corridors of the hospital.

“We went to our local GP last Tuesday and they were worried about her heart, which was racing, so they sent her into Limerick to maybe get them to slow it down with a beta blocker and calm it a bit,” he said.

“We arrived at the emergency department about 2.10pm in the afternoon and she was brought in about 2.30pm or 2.45pm.

“She was seen by doctors and the nurses and was on a trolley in the hall for a while and then she was put into a cubicle. A while later, my mother was taken out of the cubicle for a scan and when she came back, she was put in the hallway again on the trolley.

“She seemed to get disorientated very quickly and on Wednesday morning, when some of the family went in to see her, she was really very disorientated. She sat on a chair most of the time because she said the trolley was uncomfortable,” he said.

The staff were not able to deal with her condition properly while she was on the trolley or sitting in the chair, the man said. “She actually got sicker inside. She didn’t sleep from the time she went in there – from Tuesday she never slept at all during the night. One of my sisters stayed with her 24/7 and they said she never slept, except she closed her eyes for 10 minutes or for 20 minutes and half an hour sometimes.”

“Another thing that I didn’t know goes on is when it comes to meals, if you’re not actually admitted into the hospital, it’s basically sandwiches and a cup of tea or a bowl of soup but you’re not getting your breakfast, lunch and dinner,” he said.

“She was being seen by doctors and nurses and they were unbelievably good to her in difficult circumstances. I was shocked at what happened.”

“There was a lot of people there, some her own age group and I felt so, so sorry for them, lying there on trolleys. The nurses hadn’t time to look around them and the porters were magnificent. They were trying to get in and out between trolleys, taking people in for x-rays and tests. It’s a nightmare, an absolute nightmare,” he said.

“My mother wanted to come home but we couldn’t take her out of it. She didn’t want to stay there under any circumstances but, when she got the bed in the ward, she settled down.

“My mother was in the emergency department from about 2.30pm on Tuesday afternoon until Thursday night, when I got a phone call from my sister at about 8.30pm that she was going up to a ward. When she went up into the ward on Thursday night, they gave her a sedative or a sleeping tablet and she slept the whole night and didn’t wake,” he said.

“She woke up a different woman. When she got a night’s sleep, she made an unbelievable recovery. She was totally exhausted, as are other people in there. It’s an absolute living hell. I wouldn’t wish it on my worst enemy to bring anybody in there,” he said.

Since she was discharged on Friday, the 87-year-old has continued to make a good recovery and will return to the hospital for a scan in a month.
“I’ll tell you, I’ll be going to see Deputy Pat Breen and Deputy Joe Carey about it before the week is out,” he said.

Ennis Municipal District Councillor James Breen said, “I’m disgusted with the treatment of this elderly woman in Limerick emergency department. A senior citizen to be treated like this in this day and age is disgusting. An American surgeon I met recently described the Irish health service to me as ‘Third World’. He visited hospitals here and compared them with the Third World. I’m so disappointed with the health service.

“I have been contacted this week by staff in Ennis General Hospital, who are extremely concerned with the new escalation policy in the hospital group. The senior management want to send patients out from Limerick to Ennis to be placed in the clinical rooms – which I believe are used to assess patients – on extra beds.

“These rooms have no call bells, no toilet facilities and there will be no extra staff taken on in Ennis and remember, only a short time ago, the hospital was reconfigured to cater for 50 in-patients,” he said.

“I’m delighted that, at long last, the INMO has stood up and are prepared to take action to protect their members. It’s long, long overdue and I fully support that action.”

“This is barbaric, transferring patients out to Ennis from Limerick and no toilet facilities or anything. This cannot be allowed to continue. The people at the top will have to be answerable for it. The first thing the HSE do when someone complains is they go on the defence, instead of coming out and admitting what’s happening. It’s time that stopped,” he said. 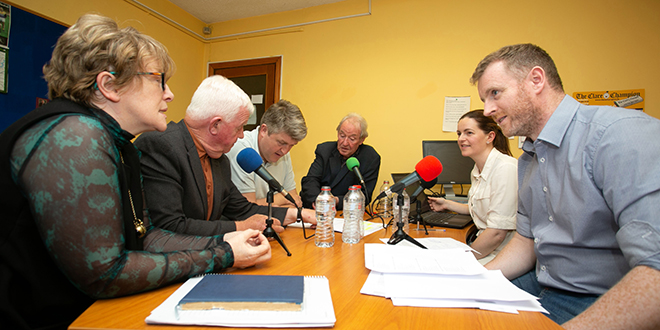 57 patients without a bed at University Hospital Limerick