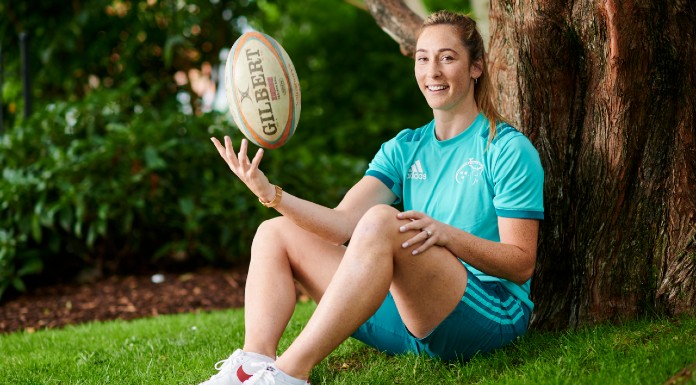 Eimear Looking Forward To Juggling Work And Play For RWC 2019

Kilmihil native Eimear Considine is part of the coverage of the tournament being held in Japan next month and will be combining her full-time role as a secondary school teacher along with punditry duties and her own rapidly developing international rugby career.

She says making the ads for the coverage was an enjoyable experience but she’s not holding out hopes of packing in the day job just yet.

“It was great fun doing the recordings. There were a lot of takes so I don’t think my acting career will take off. It was good fun and they came out really well but it just makes you realise how much work goes into advertising and everything to do with recording them. It took two full days to do those two ads alone which were 30 seconds and of that you are on screen for probably 10 seconds so it was time consuming even though it was very quick.  I was doing work with TG4 and Chris from Eir Sport rang and said I assume you can speak English if you can speak Irish and was wondering if I wanted to get on board with the World Cup coverage. Of course you are not going to say no but it is going to be a challenge between working and playing so there is not a lot of free time to get a lot of coverage in but I suppose it is hard to get somebody who plays also and that is the difficulty with getting somebody who still plays because obviously Tommy (Bowe) and the lads are retired so they have more time on their hands to do this kind of stuff. I am looking forward to it and it definitely will be challenge especially when I am doing the likes of the Japan v Russia game and those names where I will have do a lot of research for sure” she noted.

Her work on TG4 allows her to combine two of her passions in life which are rugby and the Irish language. She feels recent speculation that the native language could be made an optional part of the education system is a worrying development.

She said: “I am an Irish teacher and even though I am not from a Gaeltacht area it is still very important that we have it. It is really when you work on TG4 you see that it is very much alive. We have chats all the time in Irish and we go out after work and it is all chat as Gaeilge and it would be such a shame to  see it go. Welsh is being revived in Wales and Scottish is coming back again because it is their own language and I think we need to go that way rather than the other. I think it is going the right way because Gaelscoils are becoming a lot more popular. In Dublin there a lot more of them popping up and I think we need to work to not cut it out and give people the option to do it. I think it is a curriculum problem, I don’t think it is a language problem. You need to look at questions like when are we going to use poetry in real life and we need to make it something to have in everyday life. If you do require Irish, you are going to have to learn it and speak it and it does need to be useful day to day. If you have that, then it will become about more than just literature in the Leaving Cert exam”.

With the Rugby World Cup now just weeks away, preparations for the tournament are stepping up a notch. Eimear will be based in Dublin for the Eir Sport coverage and admits there will be a lot of time pressure involved.

“There isn’t actually that many flying over to Japan as part of the Eir Sport team so we will be studio based in Dublin which for me is pretty handy. A lot of the games are on very early in the morning so we will early starts for those. A lot of the games are Monday to Friday when I will have work and then the weekend ones are coming right back into the busiest times of my year with the November internationals and preparing for those so I think that I can do about four or five of the games so far and then depending on how Ireland get on there could be potential for more. On the day of the World Cup Final I have a game myself so that is an ok excuse. They knew that from the outset that it would be the challenge of having someone who is still playing but it is good to do it and get that experience of doing it. I will still be doing the PRO14 with TG4 but not while the World Cup is on because I don’t think there will be a minute to do it because you have to a lot of analysis not just on the day but also the preparation before that. You have to sit down and watch different games on top of your own analysis as a player and that is on top of correcting tests and organising work and actually having a life and getting your own training in so it is pretty challenging” she noted.

So how does she think Ireland will get on in Japan?

“We should get out of our group. It is a tough one to start with in having Scotland and that will be the hardest one. It all depends on what Scotland team turn up. They could be really good or really bad and you just won’t know until the day. If Ireland can get out of the group, it still is no guarantee because they will probably have South Africa or New Zealand. The way South Africa have been playing in their pre-seasons, it is hard to know which would be better or worse to meet. Ireland know New Zealand are now beatable. Australia showed that at the weekend and Ireland showed it last year so I don’t think there is that stigma with New Zealand. There is no easy game and it will be a hard quarter-final either way. They will be looking to get over that stage and do a bit better than the last World Cup” she said.

It is going to be a busy few months for Eimear on the field beginning this weekend when the Women’s inter-pro series gets underway. It was announced this week that she will co-captain the province for the tournament and while a busy period lies ahead, she is looking forward to it

“It is 13 months of mayhem from now. We have the inter-pros now and then it is straight into the November internationals and then the Six Nations. We will probably have a month off in May and then it is straight into World Cup qualifiers next August and September. It all starts against Ulster this Saturday in the inter-pros and this year it is a five game tournament. We have the three round robin games and then the semi-finals and finals so hopefully we will have those five games to play and a win this year would be great. At this stage it is all just technical work and running through line-outs and scrums and getting things fine tuned” said Eimear.

It is a busy period all round for the Considine sisters with AFLW winner Ailish being part of the Clare Ladies side who reached the All-Ireland intermediate football quarter-final. While she will be heading back down under to defend that title with the Adelaide Crows, the older sibling admits the immediate focus at the moment is very much on the local scene.

“Ailish re-signed for next year and they will have a different team because they have three ACL injuries so it may not be as easy this time around. You are never going to be as good as you want to be in one year so she is going back and hoping to build on the performance of last year and get even better so she won’t be going back until hopefully after a county final spot with Kilmihil” she stated.

With the Considine name now firmly established on the AFLW scene, would Eimear be tempted to join her sister in the professional game? She wasn’t giving much away when asked.

“There is still time but I have a World Cup to qualify for first and that is the main thing on my mind” was the answer.

Off the field, last weekend was also a memorable one as Eimear got engaged to partner Dean Ryan. She feels it was the highlight of his year so far.

“He got a bad knee over in Venice. We were there on holidays and he popped the question and we are now engaged so I’m getting used to that. This is what he was building up to all year” she smiled.

It is also a busy time for Ryan as he is undertaking to run in one of the most famous and gruelling events for a charitable cause.

“He is running the New York marathon for Temple Street and he is doing it with three other lads from Clare so the training is well underway for that. They are doing a lot of fundraising and they have to raise €20,000 for Temple Street to do the marathon. They are raffling off a heifer but you don’t have to take the heifer, you can take the money option too. The draw for that is on Saturday and there are still some tickets available” she said.

More details on the fundraising effort can be found on www.idonate.ie by searching RUN NYC 4 Temple Street.

You can listen to the full interview with Eimear below.