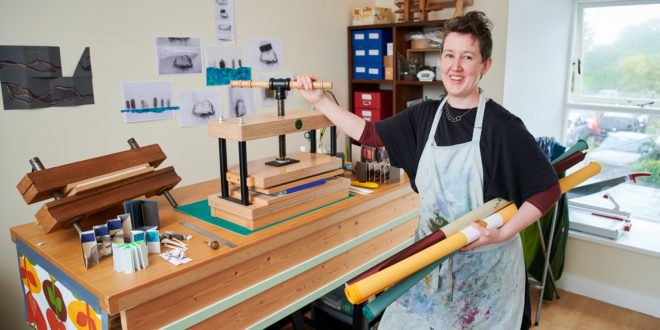 Bookbinder Eilis Murphy of Corofin who has won the RDS Craft Award 2020 for her bookbinding practice. Photograph by John Kelly.

BOOKBINDING is an intriguing age-old craft, which is being nurtured by artist Éilís Murphy at her Corofin studio. Her expertise and creativity have recently been rewarded with a €10,000 RDS Craft Awards bursary.
Éilís was one of five emerging Irish craftspeople awarded a bursary for the development for their burgeoning craft and business skills under the programme.
A judging panel of five craft and design professionals chaired by Irish artist, Róisín de Buitléar, shortlisted 12 candidates to interview in the RDS. Physical examples of their work were shown to the panel and five winners were selected following two days of discussions. In addition to the €10,000 bursary, the 2020 RDS Craft Awards winners are provided with a free stand at Gifted – The Contemporary Craft & Design Fair held in the RDS in December.
To be eligible to apply for the craft awards, emerging craft makers must have won a Design & Crafts Council Ireland, Future Makers Award or support in the preceding year.
At the awards ceremony Michael Duffy, RDS chief executive, remarked, “The RDS is delighted to contribute to the development and growth of the standards of excellence in Irish craft through enabling these talented people excel in their careers.”
Éilís’ bookbinding involves the use of traditional techniques that have remained unchanged for centuries combined with contemporary design and her own artistic innovation.
Éilís, who comes from Ballyhaunis, County Mayo has a BA in Fine Art (Print) from the National College of Art & Design but a visit by an American bookbinder in 2003 was to have an impact on her career down the line.
“He taught a module in bookbinding and I was hooked and have been binding books ever since. Working in print and lithography was 2 D but when I saw bookbinding as a 3 D artform I loved it. You can interact with books, handle them, appreciate the art,” she says.
Éilís says it was very difficult to get a training route in the craft, which nowadays is so rare. She began by studying the history of bookbinding, the materials used and its progression over several hundred years. Éilís discovered little has changed; the linen threads are still used, the brushes are the same, but the glue made from natural materials has been replaced by PVA glue.
“My first course was with the Society of Bookbinders in the UK where I trained with master bookbinders. I also studied with Frauke Schröder in Berlin, and West Dean College in the UK where you can take in one or two-week blocks at a time,” Éilís recalls.
While pursuing her primary work in fine print to generate an income, Éilís did bookbinding as a hobby, becoming progressively more proficient in the craft.
“It’s a craft you’re learning more and more about as you meet different challenges in creating a book, which become a work of art.
“In 2014, I decided to go into bookbinding full-time and I set up Folded Leaf in Corofin. Things have gone very well since. As well as binding my own artwork, I’m also called on for commissions. People see my work on the web and call on me to something special for occasions such as anniversaries or weddings.
“It’s usually one-off. Some clients have very clear ideas of what they want, others not, and I collaborate with them to bring the concept to reality. I design the books and being a fine print artist comes into play here, as ink or paint is needed in many of my projects.
Éilís also undertakes limited edition books and once again collaboration is important to delivering a book be proud of.
“I collaborate with photographers, who are producing books – coffee table books or wedding albums; writers, who want illustrations for their texts; and illustrators who want to do collections. I’ve written short text to accompany photo commissions,” she says.
Highlighting the quality of her work, Éilís outlines that the acid free and archival paper she uses produces high quality finishes. Sometimes she also uses German etching paper and traditional handmade Japanese paper. On this note, Éilís has volunteered with the Paper Conservation Department in the National Gallery of Ireland.
One of the commissions she is currently working on is an accordion book for Grace Wilentz, a poet whose work has appeared in Irish, British and American journals. This is due for publication in a couple of months.
While, bookbinding is a unique craft, Éilís says that you can start from scratch if you want to. “I run workshops in my studio, and they are open to students of all standards. I usually do workshops at the Ennis Book Festival and they attract a lot of interest. Unfortunately, that’s gone this year,” she says.
Referring to the bursary, Éilís says, “The interview process for the award has already been a game-changer for me, prompting me to rethink my practice. I’m going to focus on creating my own artist’s books and collaborating with artists, writers and others to create limited edition books.
“The €10,000 bursary is a huge boost to my practice and a real vote of confidence in my work.”
Éilís plans to use the bursary money to research and develop a ready-made range of handmade books as well as to undertake a 10-day course in book design and production in London.