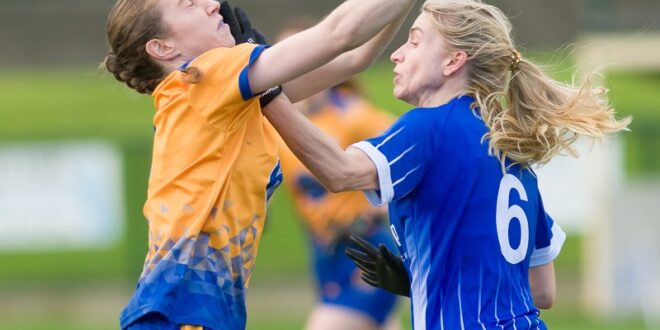 One of the main driving forces in Clare’s run to the 2020 All Ireland Intermediate LGFA semi-finals has been Laura Egan.

The Kilmihil woman, who also played a key role in her club’s 2019 senior breakthrough success, is a constant outlet in the middle third and will be central to Clare’s hopes of reaching another decider this weekend.

Egan, who teaches in St Joseph’s Community College Kilkee, outlined that the squad are all working toward that common goal and is confident they are ready to take the opportunity presented to them.

“We have been working extremely hard at training and there is a great panel of girls there who have all been pushing each other really hard to take things to that next level. Training has been really intense and I would be hopeful that it will carry through to Saturday’s game. For the year that is in it, we are just delighted to be training and playing football so anything after that was always going to be a bonus. When we sat down at the start of the year, our sole focus was just on the next game that would be ahead of us and no one was looking any further than that. We did not get the result we wanted against Kildare on our first championship outing, but the attitude of the girls after that was really positive. We wanted to go out and prove ourselves and prove the fact that we were good enough to make a semi-final. The second two games against Laois and Sligo was where we really proved ourselves in terms of that” she noted.

Having played under manager James Murrihy for all his three years in charge, Egan is confident that the squad have been gradually building to reach this point, and are now well equipped for their shot at the final.

“I think we are improving every year but particularly this year. The panel has been stronger than ever this year because girls have been around at home much more and that has really helped in terms of progress. This year more than any year, we have strength in numbers so people are really pushing for places and driving each other on at training, and that transfers to match day.You can see at training that the girls are really excited and looking forward to this” she outlined.

Egan outlined that while there was something of a surreal finish to their group campaign, she feels the squad deserved to get that slice of luck in reaching the semi-finals.

“To be honest, going into that Sligo game we thought our chances of getting through were very slight.We just had to go out with the same attitude we have had all year, and just make sure that we played as well as we can, focus on our game and not get caught up in what was going on around us. We did our job on the day in getting the win we needed but it was out of our hands at that stage. There was two minutes between the full time whistles in the two games so there was a lot of nervousness and anticipation watching for the other one to finish but thankfully it all worked out. We were delighted but I really think we did deserve it. We had played a brilliant game against Kildare, even though we didn’t get the outcome that we wanted. We have been putting in a huge effort and everyone involved really deserved it” she said.

A winter championship is something that none of the players have experienced before but Egan feels that when things are going, it helps to keep the mood bright on the dark winter evenings.

“I am really enjoying playing football at the moment and while you are enjoying it, that brings great momentum with it. We certainly have that on our side at the moment so hopefully we can bring it to our game on Saturday. It makes it all worth it because when you are enjoying it, you are more likely to come in with that pep in your step. All the girls are coming with a really positive attitude and putting in a massive effort so we will hopefully continue in that form now against Meath” she said.

Egan is based in St Joseph’s Community College in Kilkee where along with being an Agri Science and Maths teacher, she also coaches the schools ladies football teams alongside stalwart Michael Carmody. Teaching in a Covid world is something she admits is challenging but outlined that everyone is doing what they can to make the most of a unique situation.

“It has become the new normal really and people have just adapted to it. The students are doing great and teachers are really doing great work, and while some people may not realise what goes on behind closed doors, it really is not easy. In our school there are students who might have to stay in classrooms for the whole day and have lunch and break in there too so it is tough on them and tough on teachers too. You don’t meet people as much around the place but we are just getting on with it. I think it is much better than being at home trying to teach. You still have that social side to it and I think it is better for people’s mental health and we are just getting on with it”she concluded.

Previous Gardai seize €60,000 worth of drugs and cash
Next Murrihy: Clare In Bonus Territory In All Ireland Semi Final