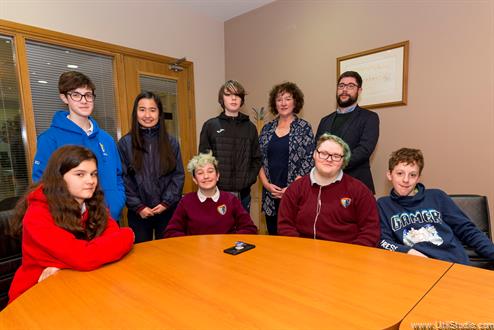 Members of the local Creative Youth Partnership at their meeting in Scariff Library to discuss establishing an arts committee for young people in the area. The meeting was also attended by Monica Spencer, coordinator of the Creative Youth Partnership, and David Bennett from Clare County Council. Photograph by Eugene McCafferty on 13/12/2019 Artist Nathalie el Baba launching an art mural project with Foróige legends in Scariff Library,

EAST Clare is fast-becoming a leader in creative arts for young people. Last Friday saw a lively celebration of the achievements of local youth as well as a planning session for the future of arts activities in the area.

Organised in conjunction with Limerick-Clare Education and Training Board, a ‘Call to Action’ event saw participants sampling a range of art forms from hip hop to photography as well as launching a local mural project in Scariff and looking ahead to projects for the New Year.

Monica Spencer, Local Creative Youth Partnership Coordinator with LCETB, explained that the initiative is one of three pilots around Ireland, with Kerry and Laoise-Offaly also trialling the project.

“The scheme is supported by Creative Ireland, a legacy of the national 2016 commemorative events and there is a major focus on community participation,” she outlined. “One of the strands is Creative Youth and my role is to act as a facilitator between formal and informal educational settings. So, that involves me working with Family Resource Centres, Clare Youth Service and Foróige. The initiative is all about the Voice of the Child, it’s the central theme.”

In Scariff, the Foróige Legends club has been an integral part of the project. Under the guidance of Treacy Doyle and her team of volunteers, a group of eight young people have been making their mark, artistically speaking, in the area.

“Over the course of this project, we used the premises of Scariff Community College, but that was after school and on a voluntary basis for those taking part,” Monica said.

Another integral part of the project, and one which was launched last Friday, was a plan for a mural for the town. Artist Nathalie El Baba lives in Capparoe and was the creative facilitator. She had been recommended by Foróige Legends coordinator, Treacy Doyle.

“There is some amazing work being done in the area by Treacy and Trojan work was carried out by Nathalie,” Monica noted. “They are real standard bearers for youth art.”

Nathalie herself told The Champion she was delighted to be involved in the project: “Foróige in the area does such fantastic work, I’d worked in the past with them and their focus is on listening to young people. It was really important for me that I would not be the person driving the work, and that it would all come from those taking part.”

A wall beside the fire station in Scariff had been ear-marked for a public art project, following on from two ‘graffiti jam’ events held previously in the area.

“We have an area of around 30-feet by three-feet and we’re going to cover a lot of that with eight two-foot square pieces,” Nathalie explained. “The work has so much colour and vibrancy and that’s what really interested people, rather than working to a set theme.”

Since the end of October, the eight young participants have working at venues including the Foróige club and East Clare Community Co-op and they also got to work at Nathalie’s own studio.

“That was important when we were spray painting, because there’s space and outside lighting,” she said. “Participants also got to see where I work, so I hope they enjoyed that.”

The eight panels will be installed on the Fire Station wall in the coming weeks and Nathalie says they’ll create an “outdoor gallery” in Scariff.

“It was too cold to paint directly onto the wall at this time of year, and the individual works will certainly bring a real energy to the area. We’ve had great feedback from local people in the past in relation to outdoor art.”

Nathalie paid tribute to those also working on the initiative.

“Treacy and Jane Doyle and Suzanne McNamara are really dedicated and that shone through in the way the project work. The young people really enjoyed taking part and coming together to work on a joint creative project. It was great to be able to provide them with the space to express themselves.”

To look at future directions for the youth arts project, and to capture the energy and enthusiasm generated to-date, a planning meeting was held in Scariff last Friday, with the young participants themselves very much leading the way.

“David Bennett, who is Rural and Community Development Officer for East Clare supported the organisation of the meeting,” Monica explained. “The two of us were very happy to sit at the back of the room and let the young people take the lead. Their remit was to decide where the project goes next and which art forms they’ll explore. We were so impressed with how they ran the meeting and the fact that they’re looking now at reaching out to other organisations which involve young people in the area. To see their purity and honesty and their mature and caring attitude was very moving. It was a fantastic end to a wonderful day.”

Fiona McGarry joined The Clare Champion as a reporter after a four-year stint as producer of Morning Focus on Clare FM. Prior to that she worked for various radio, print and online titles, including Newstalk, Maximum Media and The Tuam Herald. Fiona’s media career began in her native Mayo when she joined Midwest Radio. She is the maker of a number of radio documentaries, funded by the Broadcasting Authority of Ireland (BAI). She has also availed of the Simon Cumbers Media Fund to report on development issues supported by Irish Aid in Haiti. She won a Justice Media Award for a short radio series on the work of Bedford Row Project, which supports prisoners and families in the Mid-West. Fiona also teaches on the Journalism programmes at NUI Galway. If you have a story and would like to get in touch with Fiona you can email her at fmcgarry@clarechampion.ie or telephone 065 6864146.
Previous New Clare Selector Ken Ralph Encouraged By Positive Atmosphere Ahead Of New Campaign
Next Man detained in Ennis as counterfeit notes are seized