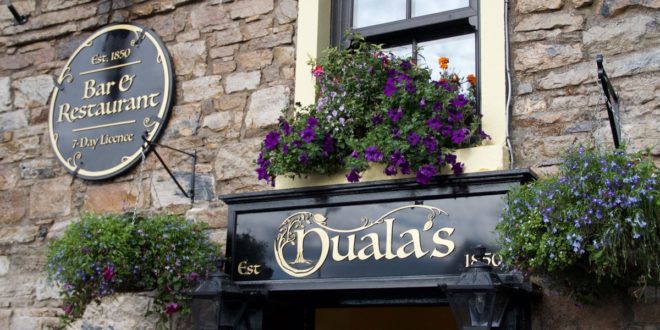 ADAPTING to challenging times is nothing new for the East Clare business community and, as some sectors of the local economy begin to re-open, the goal is to survive and thrive as the ‘new normal’ becomes apparent.

In Tuamgraney, Nuala’s Bar and Restaurant occupies a premises that dates back over 150 years. It has had three different licensees over that time, and was formerly McCormac’s Bar and later Durack’s. A thriving food business began in 1999 and, in order to cater for her loyal customers, Nuala O’Brien began to offer a takeaway service once the restrictions kicked in. “I was aware very quickly that small-scale operations would not be viable, so it was a case of scaling up or shutting down,” she explained. “I’m taking on-line orders now and that works really well. Between 1 and 8pm, customers can order in advance, then pull up in the car park where I will drop the food straight into the boot, they don’t even have to get out. I have been able to turn a small profit and to keep two staff on the books.”

Nuala also cited other supports including the Wage Subsidy Scheme and Business Continuity Vouchers from the Local Enterprise Office (LEO), as central to the company’s survival, but said that greater clarity on VAT and rates is needed: “I think Leo Varadkar has done a good job, but we need the new government in place, so that decisions can be made for businesses.” Like many, Nuala is looking for more certainty about a re-opening date. “The target date for restaurants is June 29 and for pubs, it’s August 10. The Vintners Federation is looking for guidance, because there are so many businesses who do both.”

In Mountshannon, the local Saturday market won’t be running in the immediate future, despite the fact that farmers markets now have permission to operate. On the Clare/Galway border, Dermot O’Mara of Sunny Meadow Farm, is one of the market’s stalwarts, but told The Champion that a collective decision had been taken: “In ten years, there are probably only four Saturdays when we haven’t opened. We’ve been there through rain, hail and snow, but decided that it would simply be too difficult to implement social distancing.” Sunny Meadow grows and supplies home-grown and imported organic fruit and vegetables and has experienced an increase in demand for its home deliveries. “More people are looking for what is local and what is in season,” Dermot explained. “Some people tell us they’re more wary now of supermarkets and crowds. Each of our orders is individual and we harvest to order. Green vegetables are in demand, as well as ginger, garlic and lemons. People are looking for immune-boosting foods.”

In the long term, both customers and vendors are hoping that Mountshannon Market will re-open. “We miss the social interaction,” Dermot said. “With deliveries, we’re just dropping and running, to maintain social distance. We are hopeful for the future of the market, and waiting to see what the new normal will be.”

In Tulla, Vaughan Supply on Main Street, continued to trade over the course of the lock-down, because of the fact it supplies essential equipment to the farming sector. Since Monday last, the re-opening of the construction industry has increased demand. “We were deemed to provide an essential service, so were able to continue trading during the lock-down,” explained Sheila Vaughan. “It’s a busy time of year for us, but we’re not overly busy either.”

Because of the nature of the premises, Vaughans quickly took steps to manage customer flow and those structures remain in place. “The shop is quite small, so we built a counter outside,” Sheila outlined. “We’re all happier with that situation and we know our customers and they’re mostly local people.”

Fiona McGarry joined The Clare Champion as a reporter after a four-year stint as producer of Morning Focus on Clare FM. Prior to that she worked for various radio, print and online titles, including Newstalk, Maximum Media and The Tuam Herald. Fiona’s media career began in her native Mayo when she joined Midwest Radio. She is the maker of a number of radio documentaries, funded by the Broadcasting Authority of Ireland (BAI). She has also availed of the Simon Cumbers Media Fund to report on development issues supported by Irish Aid in Haiti. She won a Justice Media Award for a short radio series on the work of Bedford Row Project, which supports prisoners and families in the Mid-West. Fiona also teaches on the Journalism programmes at NUI Galway. If you have a story and would like to get in touch with Fiona you can email her at fmcgarry@clarechampion.ie or telephone 065 6864146.
Previous Feakle man’s ‘Covid cut’ head shave to raise funds for The Mater
Next Clare Lotto winner comes forward