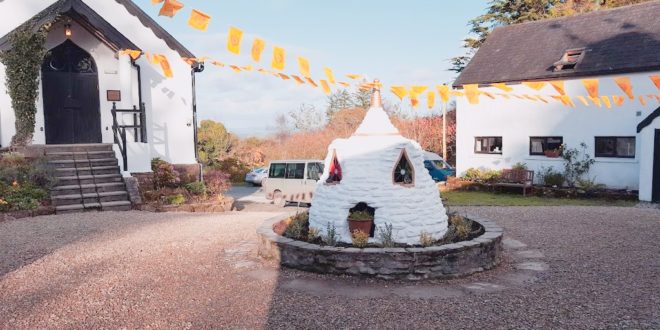 THE woodlands nestled along the The 12 O’Clock Hills, in East Clare, might seem a world away from the tropical forests of Thailand, but both provide inspiration for reflection and retreat from the world. And, tucked away along the woodland trails, a stone’s throw from Kilkishen, the Sunyata Buddhist Centre is dedicated to teaching a form of meditation associated with the Thai Forest tradition of Theravada Buddhism. As well as welcoming a growing community of Irish Buddhists, in pre-pandemic times, the centre regularly welcomed Buddhist monks from South East Asia on retreat during the rainy season from July to October. Like all places of religious practice, the centre shut down in response to the coronavirus and has also succeeded in reaching its community and keeping activities going on-line. “In ordinary times, people would be welcome to visit the centre at any time, outside of the dates when retreats would be going on,” explained Heike Griffin, a member of the Sunyata Centre’s board of management. “We might have two or three people visiting at any one time, or larger groups coming for retreats for a week or so.” For now, while the centre is closed, those retreats are being conducted on Zoom – with surprisingly positive results, which include an increase in interest in Theravada Buddhism.

“Our community members come from all over Ireland and from other countries,” outlined Heike. “For retreats, people would normally have travelled to Clare. During the ‘Vassa,’ which is the three-month rainy season in South East Asia, monastic Buddhists are encouraged to stay in one place, so we would normally welcome Thai monks on retreat. The Thai community are very supportive and would come here to prepare food during the Vassa.”

Interest in Buddhism in Ireland has been steadily increasing in recent decades, as evidenced by the most recent Census of 2016. The Central Statistics Office (CSO) shows that Buddhism grew by just over 12 percent between 2011 and 2016, from 8,703 to 9,758. The figures showed that 53% of those who described themselves as Buddhists were Irish by nationality.

Globally, Buddhism, one of the major world religions. According to its lore, its founder is Shakyamuni Buddha who lived and taught in India in the sixth century BC. He began life as Siddhartha Gautama, the crown prince of the great Shakya Kingdom. At the age of 29, he learned of the deep suffering experienced in life by people and renounced his wealth. After about six years of study, self-deprivation, and meditation he learned what caused happiness and suffering and achieved ‘enlightenment’. It was at this point that he became known as the Buddha, and embarked on decades of teaching others about the principles of non-violence and loving kindness.

Buddhism developed in three distinct phases, each one emphasising different aspects of the Buddha’s teachings. The main branches, all of which have a presence in Ireland, are Theravada, Mahayana and Tibetan Buddhism, whose key leader is the Dalai Lama. Theravada, which is the tradition followed at the Sunyata Centre is also known as Southern Buddhism. It is described as the oldest tradition and is strongest Sri Lanka, Cambodia, Thailand, Laos and Burma.

“It works for me,” said Heike. “When I came to Buddhism, it was with an inquiring mind, I always want to questions things. I wouldn’t necessarily be someone who believes easily. Buddhism encourages questioning and exploration. I had been interested in meditation for many years and Buddhism felt right. “I felt like I was at home,” Heike said. “Life is easier, lighter and more enjoyable.”

The Sunyata Centre runs like a monastic community along a number of ‘precepts’. These five principles of Buddhism including avoiding the following: killing any living creature; theft; the misuse of the senses or sexual misconduct; wrong speech; and intoxicants.

Guidance and personal growth are supported at the Sunyata Centre by a series of daily events and longer retreats. The centre also embraces its leafy location with mindfulness walks in collaboration with The 12 O’Clock Hills Project

Covid-19 has caused activities to move online for the time being. “Every morning and evening, we now have our ‘Puja’ sessions on Zoom,” Heike explained. “These are chanting sessions and we also broadcast our silent meditation sessions on the platform. We have meditation on Zoom on Wednesday evenings, as well as beginners sessions, reflections and the monthly Women’s Day event.”

Like many religious communities, who have been forced to adapt and embrace alternative methods of reaching their communities during lockdown, the Sunyata Centre has seen record levels of engagement. “One of our younger board members got us all on Zoom,” Heike said. “The experience has been hugely positive and very interesting and revealing. We have all of our activities online and it’s taken off like mad.”

The centre has even gone so far as to run its retreats online, with great results. Perhaps not surprising when the centre quotes the Thai Forest Master Ajahn Chah who described meditation as a “holiday for the heart”. Heike has most recently been involved in a ten-day retreat, conducted on Zoom, which invites those participating in their own homes to follow a series of precepts and arrange their days to fit a designated schedule. A special ‘family camp’ was held online over the June Bank Holiday, continuing a very popular initiative at the Sunyata Centre. The event, which involves family and individual activities, catered to members of all ages and groups of all sizes. “There were lots of mindful activities for families,” Heike explained. “The family retreats have been a great success right from the start. They’ve been almost as good as in-person retreats. It’s strange at first looking at people in little boxes, but the energy of the retreats is still there and it still works.”

The strange nature of lockdown has presented all of us with challenges and, Heike believes, has brought about an increase in the number of people seeking spiritual support. “People really are so hungry for support,” she said. “We have had lots of people coming to us for the first time, who have discovered Buddhism, and we will look at continuing online activity, depending on the demand, and insofar as we can cater for it.”

Attendance online is free-of-charge, as it is for attendance at retreats on-site. Those attending are invited to make donations, which can be done through the website. “The centre is run on donations,” Heike noted. “There is no charge for what we offer, we are a charity and we really on people’s generosity to cover our running costs. If people can volunteer time or skills, that’s also really important and hugely appreciated. There are many ways to give.” More information is available on sunyatacentre.org.

Fiona McGarry joined The Clare Champion as a reporter after a four-year stint as producer of Morning Focus on Clare FM. Prior to that she worked for various radio, print and online titles, including Newstalk, Maximum Media and The Tuam Herald. Fiona’s media career began in her native Mayo when she joined Midwest Radio. She is the maker of a number of radio documentaries, funded by the Broadcasting Authority of Ireland (BAI). She has also availed of the Simon Cumbers Media Fund to report on development issues supported by Irish Aid in Haiti. She won a Justice Media Award for a short radio series on the work of Bedford Row Project, which supports prisoners and families in the Mid-West. Fiona also teaches on the Journalism programmes at NUI Galway. If you have a story and would like to get in touch with Fiona you can email her at fmcgarry@clarechampion.ie or telephone 065 6864146.
Previous New West Clare Cathaoirleach Optimistic About Region’s Recovery
Next Sheepdogs demonstrate social distancing in the Burren