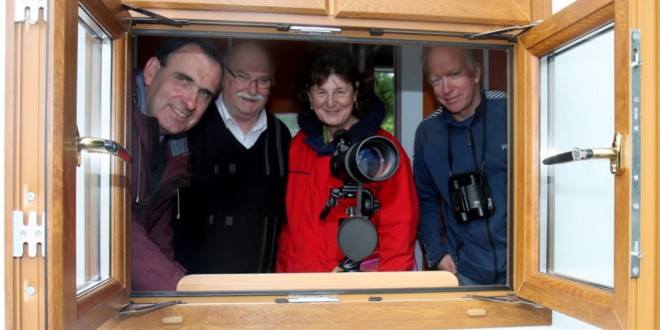 Lining up to view the sea eagles in Mounthsnnon.

THE East Clare economy soared by an extra €500,000 last year, thanks to the lure of the first successful breeding pair of white-tailed sea eagles in the country in over a century.

Clare County Council, which funds the popular White Tailed Sea Eagle Viewing and Information Point at Mountshannon Pier, confirmed the facility generated more than €500,000 for the local economy in 2014.
A visitor survey conducted last year found that 43% of people reported the attraction of the sea eagles was the primary factor influencing their decision to visit Mountshannon.

More than 10,000 people flocked to the shores of Lough Derg between mid-July and September 2014 to catch a glimpse of the eagles which had nested on Bushy Island, off Mountshannon Bay.

A person from Northern Ireland on a sabbatical completed a visitor survey of those attending the viewing and information point.

Dr Allan Mee of the Golden Eagle Trust acknowledged that some day trippers visiting Mountshannon last year may not have attended the information point, as they weren’t aware of the presence of the eagles.

Dr Mee said that almost 90% of those surveyed confirmed they had heard of the eagles, which showed that despite very little advertising, people were aware of their arrival.

He confirmed that a post-graduate student from Limerick Institute of Technology has been secured by Clare heritage officer, Congella McGuire to complete a more detailed study on the local economic and social impact this summer.

Ms McGuire noted that the visitor figures compare well to the Island of Mull in Scotland, where white-tailed sea eagle watching has been popular for more than 10 years. A greater percentage of people came to Mountshannon (43%) specifically to see the eagle pair than to the Island of Mull (23%), where eagle tourism brings in an estimated £5 million annually.

The viewing point, which is manned by two people from the local community council and local authority as part of a joint initiative, has reopened to the public following a hugely successful pilot opening period last summer.

“The interest in the birds has grown over the years. When we first started in Mountshannon in 2012 and 2013, we didn’t have any facilities and were just working out in the open on the pier. It has become more organised and professional, following the provision of the information point. We are hoping the eagles in Mountshannon will be productive as they have been our star birds in recent years, producing chicks in 2013 and 2014,” Dr Mee said.

The viewing and information point features telescopes, information and displays about the birds.

“The council’s trial opening in 2014 shows there is significant and genuine interest among the general public in these wonderful birds. People are especially fascinated by how and why the birds have settled and began to breed in Lough Derg. This project also demonstrates the potential in terms of tourism product development at this location,” said Ms McGuire.

“Clare County Council is delighted to have played a leading role in increasing public interest in the local white-tailed sea eagle population, without disturbing them in their natural habitat.

“By doing so, the council is playing a key role in safeguarding these protected birds and their nesting activities, as well as providing an excellent addition to the local tourism infrastructure,” she added.