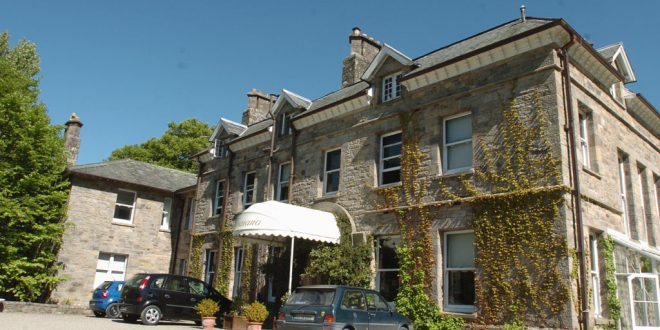 A COURT has heard more than €128,000 worth of damage was caused to Tinerana House during a burglary that “gutted” the Killaloe mansion, which is now owned by the son of Euromillions winner Dolores McNamara.

It emerged that although €10,000 worth of antique light fittings and fixtures were stolen from the property, these were sold on for the nominal sum of €1,355 to a scrap metal depot.

Jeffrey Lee, 44, with an address at 25 Cosgrave Park, Moyross pleaded guilty to the burglary of Tinerana House, Ballycuggeran, Killaloe on a date unknown between August 17, 2013 and September 14, 2013.

A co-accused Declan Browne, 27, from Lakyle, Ardnacrusha, but who is currently living with a relative in Clonlara, pleaded guilty to handling stolen property at Clare Circle Metals, Ballysimon Road, Limerick on September 13, 2013.
They both appeared before Ennis Circuit Criminal Court this week, where the sentencing judge was given an overview of the facts in the case.

Detective Sergeant Oliver Nevin of Killaloe Garda Station outlined that Tinerana House is situated on 200 acres of land. It was formerly owned by Pascal Carmody, who ran it as a health farm before selling it on to a consortium who were planning to develop it.

However, when the recession struck, it was sold again and is now in the ownership of Gary McNamara, who currently runs it primarily as a working farm.

Detective Nevin explained that when Mr McNamara came to the garda station to report the burglary, he said “the premises had been gutted of all of its light fittings, copper piping and cylinders”.

The detective said the 16 bathrooms in the property had been “practically gutted of all their antique brass fittings”.
Highlighting the damage that was done with the aid of photographs to the court, the detective told how ceilings had been ripped down to access copper pipes and all of the bathrooms had been “smashed apart” to get easy access to the brass taps and fittings attached to the sinks. Carpets were taken up to access copper piping beneath the floorboards and three copper cylinders from hot presses were also removed.

One photograph showed the damage caused when a large copper tank was thrown down the stairs and how the water had spilled from it.

He added that a number of paintings had been left lined up and it was believed these were to be taken at some stage but were left behind.

Detective Sergeant Nevin said the light fittings, which were typically brass antiques, had been cut down and left with exposed wires. He said damage had also been done to the switchboards in the process.

He said Lee and Browne were identified on the back of CCTV footage taken from Clear Circle Metals, a scrap metal recycling facility based on the Ballysimon Road.

Detective Nevin said during their investigation, they had been in contact with a number of metal dealers and discovered that a considerable amount of the property stolen had ended up at this recycling facility.

Gardaí were able to recover 50% of the antique light fittings and bathroom fittings at this location. However, the three copper cylinders and all the copper piping were not recovered.

He said having trawled through CCTV footage, the defendants were viewed emptying copper piping and other items into bins at the Clear Circle Metals depot. In one image, he said the property was wrapped in sheets that were taken from Tinerana. They were also videoed in the cash office of the recycling depot, receiving payment for what they brought in.

Detective Sergeant Nevin explained that all the items brought to Clear Circle Metals was weighed first and the accused men received payment by its scrap metal value, rather than its antique value.

“From a scrap metal perspective, the cash value was €1,355. I think the total value by the owners to the light fittings and tap fittings, which were antiques, was €10,000. The property was assessed by a chartered architect and the damage done, including VAT, came in at €128,778,” he said.

He said Mr McNamara did not have insurance to cover this and so he would bear the cost himself.

Judge Gerald Keys, presiding, said he found it very difficult to believe from the photographs that it was a one-man operation.

The court heard that Browne and Lee were arrested on the same day. Lee admitted committing the burglary, while Browne admitted handling the property.

It emerged that there was a third person in the cash office of Clear Circle Metals but that person was questioned and was not tied to the crime.

Detective Nevin said Lee has 33 previous convictions and the most recent was recorded last February for an offence of assault causing harm, which occurred in 2010. He said on this charge Lee received a three-year prison term, which he is currently serving.

He said Browne has a total of 47 previous convictions, numerous for theft and burglary.

Ray O’Halloran of Speedline Engineering gave evidence to the court that Lee had worked for him in the early 1990s and again more recently. He said he provided “top-quality” work in a particular type of specialised engineering work. He said Lee had issues with alcohol in the past but understood he had now given up alcohol.

He said he had been involved in a project mentoring troubled youths and that Lee had been helping out with this.
Defence solicitor Mark Nicholas told the court that since Lee’s mother died, he made her a promise to stay out of trouble and he said he has been doing that. He has been involved in a literacy skills programme in prison where he assists other prisoners, as well as the Samaritans in prison.

“This is a man who has changed. He has not been in trouble since 2013. He owned up to his part and he has changed,” Mr Nicholas said.

Judge Keys said Lee is currently serving a three-year sentence and he felt if he was to impose a sentence it would have to be a consecutive sentence, otherwise there would be no recognition of the amount of damage he caused.
“The point is he caused €128,000 worth of damage. I can’t ignore it and the difficulties are if I don’t allow it to run consecutive, then he serves none of the sentence for this crime,” he said.

He was urged to consider imposing a suspended sentence, rather than a consecutive one, by defence counsel.
Pat Whyms, BL, defence counsel for Browne, said his client had suffered from a drug addiction and that part of the delay in this coming to court was because his client had taken up residential treatment and was dealing with this addiction.

Browne’s father John, who is a builder by trade, said he had employed his son from time to time and there was a job available for him to work on starting this summer. He said he has “noticed a huge difference” in his son.

“He’s obeyed all his curfews. I’m 100% sure he hasn’t been taking drugs. As I said before, he is a good worker. I don’t know why he got involved in what he was involved in,” Mr Browne said.

Judge Keys said he had been handed a lot of documentation in the case, which he wanted to read before passing final judgement.

He adjourned the case to June 14 for final sentence.