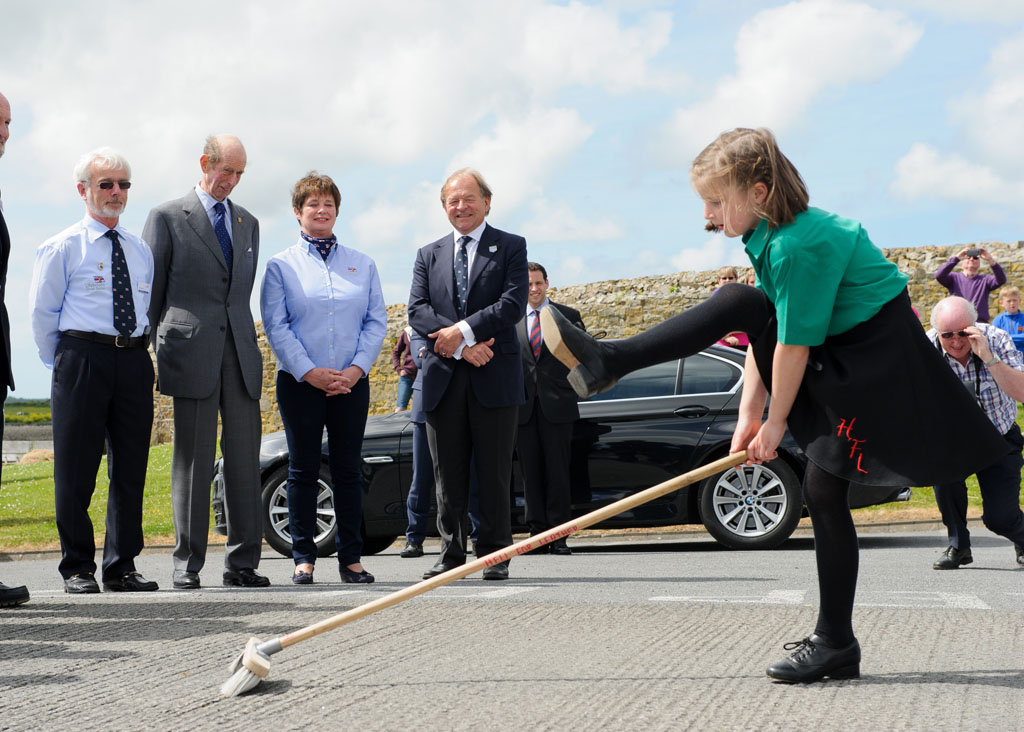 Prince Edward, the Duke of Kent, flanked by Vincent Keating, deputy launching officer. and Pauline Dunleavy, Lifeboat operations manage,r looks on as Grace Fennell of Hell For Leather dance troop performs a brush dance, during his visit to the Lifeboat Station in Kilrush. Photograph by John Kelly.

THE Duke of Kent visited Kilrush RNLI station in Cappa on Tuesday as part of a two-day tour of lifeboat stations in Clare, Tipperary and Kerry.

The Duke has been president of the RNLI since 1969. The 81-year-old arrived in Kilrush by helicopter, which landed in the local GAA field. There was a sizeable garda presence en route to Cappa and the roads were closed from shortly after 3pm, while Prince Edward was at the lifeboat station.

His Royal Highness was greeted by the volunteer lifeboat operations team, lifeboat crew members and the local fundraising branch.

As part of the visit, Kilrush RNLI showcased local Irish dancing, the Irish Whale and Dolphin Group, hand-crafted traditional Irish currach building and a selection of local pottery from the Brothers of Charity. The Duke was particularly taken with the display of brush dancing.

Also in attendance were representatives from Kilrush GAA, focusing on the partnership between the GAA and RNLI working together to prevent drowning. In fact, Kilrush GAA chairperson Niomh Madigan, was in deep telephone negotiations with Wolfe Tones GAA Club over a Garry Cup football fixture, in the minutes before the royal visitor arrived.

An Irish yew tree was planted to honour the visit, followed by a brief launch and recovery of Kilrush RNLI’s Atlantic 85 lifeboat.

“It was an honour to welcome His Royal Highness to Kilrush Lifeboat Station. We are very proud of our station and delighted to host the president of the RNLI. We showcased our great team, as well as great community spirit,” said Pauline Dunleavy, Kilrush lifeboat operations manager.

She paid tribute to Kilrush GAA for attending. “Much like a lifeboat station, a GAA club is at the heart of community life and through this partnership we all can both play a major role in preventing deaths by drowning,” she added.

The Duke of Kent visited the RNLI station at Cappa, Kilrush.