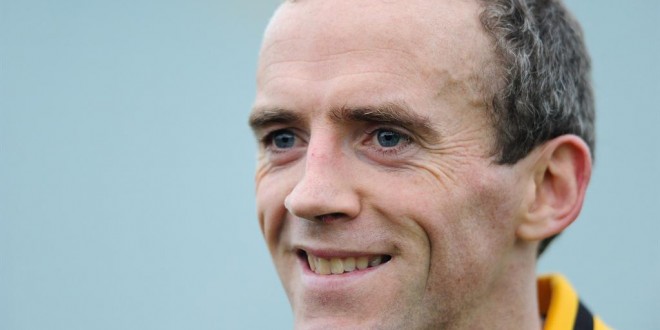 PAUDIE Kissane will spend much of this weekend behind his steering wheel. The 33 year old Clare coach, who retired from inter-county football in 2013, will be in Miltown Malbay on Friday for Clare training, while they are due to play Castlebar Mitchels in a challenge on Saturday.

All going well, next week Kissane will be preparing for an All-Ireland club final and Clare’s opening league game away to Waterford on Sunday week.

In recent weeks the 2010 All-Ireland winning wing back has had to prioritise his county coaching role above his club commitments.

“If I’m going to do the Clare job right, I have to be fully committed to it. If there has been any clashes, over the last few weeks, Clare had to come first. The club have been very good trying to arrange a few games and training around my schedule but at times I’ve just had to do my own stuff,” the Athlete Development and Performance Coach told The Clare Champion.

It’s not just thoughts of football that are invading Kissane’s thoughts either. He is studying for a Masters in Strength and Conditioning via distance learning so he has few spare moments.

Recent games against Galway, Limerick and Dr Crokes, where Podge and Seán Collins featured, have presented Kissane with a first hand view of the 2014 Clare panel.

“To be honest I’m still getting to know lads. Early on I wouldn’t have been there on a full time basis and then we had a break around Christmas so it’s really only in the last couple of weeks that I’ve been there on a regular basis. It’s step by step. Things aren’t going to change over night. We’re trying to get the panel together now for the league and just take it day by day,” he said.

He discounts any suggestion that Clare’s preparations have been hampered by not taking part in the McGrath Cup.

“We had some good games in the last few weeks so I don’t think it has been a negative that we haven’t taken part in the McGrath Cup. You don’t like pulling out of these competitions but the players had their own reasons for that as regards the seeded draw. It hasn’t affected our preparations. It has allowed us to focus on ourselves and get a good look at all the players,” Kissane maintains.

He is most enthusiastic about his involvement with Clare and feels that he is well prepared in both footballing and educational terms.

“In my mid 20s I did a Sports Science degree. I was mad interested in the area of coaching and fitness. Since then I’ve mixed coaching, strength and conditioning and athlete development. I now work for myself. I was working with the Cork County Board for a while and I was involved with development squads. I’ve been involved with coaching over the last seven or eight years but this is my first job where I’ve been really full on. It’s a chance for me to hopefully help make an improvement with the lads rather than coming in and out in an advisory capacity like I was before,” he believes.

While Kissane has picked up plenty of insight from his time as a Cork footballer he is keen to maintain an element of independent thinking.

“I was always trying to learn from what the coaches were doing and trying to pick up things along the way. I would feel that I have learned a good bit and I have been lucky enough to play under a lot of good coaches. That’s what I’m trying to provide to the lads now. I feel I have something to offer but time will tell. What works with one crowd doesn’t mean it’s going to work for another. You’ll always have your own thoughts and opinions, you reflect on ideas you have come across and then you come to your own conclusion at the end. That’s where maybe some club coaches make mistakes. They’ll see something being done elsewhere and they’ll say that will automatically work for them. But it all depends on the level of your players and then you make your own decisions,” he said.

Kissane is certain that a well prepared team, armed with self belief, can make it happen.

“What I’m trying to preach to the lads is that if we can get fellas to believe in themselves fully and once we’re organised and working hard, I definitely feel we can make progress. We’re really only focused on the first league game on Sunday week against Waterford. A lot can happen down the line but it’s about getting as best prepared as possible for the first league game. Then we’ll just keep it game by game.”

“Colm and Ger have been involved at different levels with Clare for a long time and they’re passionate about Clare football. They genuinely want to improve it. That was a big part of me getting involved. We’re getting on fine so far anyway. If you feel strongly about something, you disagree with it in a good way. That’s how every group works. It’s better than saying nothing and going away giving out,” Kissane laughed.

“Chris comes from a different background with the rugby and being from Australia. He has his own ideas as well. We work together. Chris is focusing on the gym work, prehab and injury related work. But we try and do as much as we can with the ball, even from a fitness point of view. That’s what’s going to decide how we do whether that’s putting the ball over the bar, tackling or stopping the other team from scoring,” he noted.

Making the transition from county player to coach takes some acclimatising.

But it’s part of the challenge. When I was with Cork I was focused on myself. You’re very selfish in your preparations. But now, all of a sudden, I want to do this role to the best of my ability. It’s a lot more, it’s not just about going training or doing a session and you’re done. There’s a lot more analysis. You have only so much time with the players and you’re trying to get the most improvement in a short spell of time. There’s a lot more planning and a lot more analysing going into it but everyone is doing that. That’s the norm at the moment,” he pointed out.

A two hour drive to Clare’s current midweek training base in UL presents Kissane with plenty of thinking time. It’s quite a journey but he isn’t dwelling on that. In fact he is enjoying his Clare experience so far.

“I thought about it and I said I’d go for it. Ideally you’d like to have a shorter spin but at the same time, I see it as a great opportunity. As of now I’m enjoying it and I’m looking forward to the next session and the next game. I’ve been there so recently and hopefully I’ve a lot to offer in that way. I say it to the players too that I’m nearly one of them. I only finished up playing at county level last year. It should make it easier and I’ve had no problem so far with regards to communication and building up a relationship with players,” the Clyda Rovers club man said.

If Clyda make it to the All-Ireland club final, the Clare panel might notice a bounce in his step as they prepare for the crucial NFL division 4 opener away to Waterford on February 2.

West Clare native Peter O'Connell has worked for The Clare Champion for 12 years and covers everything from sport, especially GAA, news, features and has been even known to branch into the fashion scene on occasion.
@@westclarepage
Previous Philomena author for Ennis Book Club Festival
Next Girls take centre stage at Flannan’s