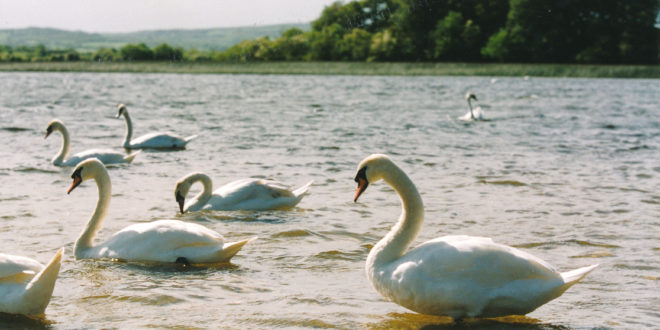 Ballyalla Lake, one of the suggested potential sites for a motor-home park

THE Ennis Municipal District is to motor ahead with exploring suitable locations for the development of overnight parking for motor-homes near the town centre.
Both Ballyalla and Ballybeg lakes have been flagged as potentially suitable sites for the venture which, if it goes ahead, is expected to result in an economic boost.
Mayor of Ennis, Councillor Paul Murphy has led the calls for the facility saying holidaymakers don’t just want to visit seaside locations.
He pointed out that the ‘staycation’ market needs to be targeted “particularly in these current times as foreign travel will not be very prevalent for the foreseeable future.”
He outlined that the main requirements are a chemical toilet discharge point, regular wastewater discharge and running water.
“The fees recouped would be year round and a facility like this would bring additional business to Ennis. Similar facilities currently exist in Cobh and Bantry and have proven to be a great success.”
Eamon O’Dea, Senior Executive Engineer replied, “Ennis Municipal District will consider the development of overnight parking areas for motor-homes close to the town centre. This will require the identification of suitable locations where the service provision is available, and amendment of the Ennis Town Council Car Parking Byelaws 2014, particularly “11(3) A car park may not be used for overnight accommodation purposes by camper van, caravan, car or otherwise”.
“As the process of amending the by-laws and selecting suitable locations will take some time, this facility might be provided on private property locations following consultation with the Ennis MD-County Council.”
Councillor Mary Howard seconded the motion, saying there are very few places like this around the county. She suggested that the council could move quickly to capitalise on the increased numbers staying home this summer by allowing motor-homes in the Ennis Coach Park.
Councillor Johnny Flynn suggested that the amenities provided at Ballyalla and Ballybeg would be ideal saying “with the two lakes as potential sites we would be on a winner”.
The vast array of tourist attractions in the county was pointed out by Councillor Pat Daly, who said that Ennis would be a perfect base from which to explore them. He suggested a public – private partnership could be explored to get a motor-home park established.
Councillor Ann Norton stated, “This is something the council need to look at. There is a lot of talk encouraging people to stay at home and camper vans are becoming hugely popular.” She added, “Ennis has so much to see around it”. Councillor Mark Nestor said he would welcome anything that benefits tourism in the town.
Councillor Clare Colleran Molloy pointed out that all councillors support the plan, and asked, “are we willing to put money behind it?”
“So many time we talk at these meetings and because nobody says we need to put money behind it, nothing really happens.” It was proposed that the councillors use the General Municipal Allocation to fund a feasibility study. This was seconded by Councillor Flynn.
Director of service, Carmel Kirby stated that the council would be happy to carry out a study and to speak to private providers. She added that parking by-laws prohibit this type of parking on public spaces, ruling out the idea of opening up the coach park for overnight parking.

UP TO €3,000 worth of food and other essential supplies have been donated by members …