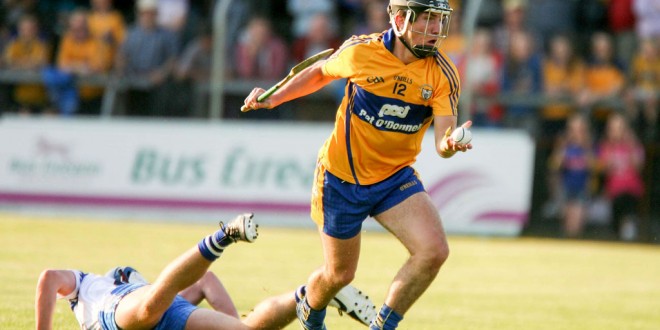 Ian Galvin buried the goal that took down Tipperary

THE Clare hurlers scored an incredible, breathtaking win over Tipperary in Semple Stadium on Sunday. Clare didn’t lead until 90 seconds from the end of five minutes of injury time. Tipperary had led 1-21 to 1-20 three minutes into injury time. It was Clare’s first Munster championship win over Tipperary since 2003 and means that next Sunday’s final round game, at home to table topping Limerick, will have a place in the Munster final at stake. If Clare win they will qualify for the final. They currently sit on four points, one behind Limerick, while Cork, who play Waterford next week, are also on four points.

Peter Duggan who put over 0-15 in total, 0-13 from frees, was superb while Podge Collins also injected life and pace to the Clare attack. The Cratloe man set up Ian Galvin’s 64th minute goal, seconds after Jake Morris had spurned a goal chance for the home county.

Tipperary led 1-10 to 0-9 at half-time a scoreline that flattered Clare, who were very poor for most of the first half. Clare hit eight wides in that half, their touch was uncertain and they simply stood off Tipperary.

Michael Ryan’s team, who are now out of the Munster championship and All-Ireland qualifier series, looked to be in control for most of the second half, until Ian Galvin struck for that vital goal. A feature of Clare’s display was the impact from the bench, with Seadna Morey also excelling, adding pace and urgency from wing back.

The game was in the balance deep into injury time when Collins and Duggan struck for game winning points. They were also season saving points and set Clare up for a mammoth clash in Cusack Park on Sunday.

A more comprehensive match report will be published in Thursday’s print edition of The Clare Champion.

West Clare native Peter O'Connell has worked for The Clare Champion for 12 years and covers everything from sport, especially GAA, news, features and has been even known to branch into the fashion scene on occasion.
@@westclarepage
Previous Clare unchanged but Tipp make three changes
Next Cycling with legend Seán Kelly in The Burren