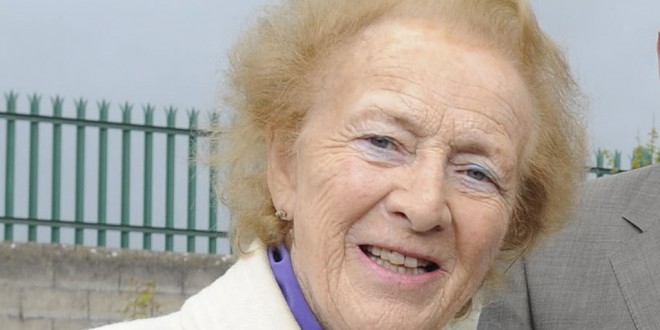 The death has occurred of Dr Maeve Hillery, the widow of former President of Ireland, Dr Patrick J Hillery. The president, Michael D Higgins and Taoiseach, Enda Kenny have led many tributes to Dr Hillery.

Dr Hillery, aged 91, passed away peacefully at her Dublin home the weekend. She married Patrick Hillery in 1955, having met while studying in University College Dublin.

She was well-known in Clare, especially West Clare where she and her husband holidayed in the family home in Spanish Point.

Patrick Hillery was the sixth president of Ireland, holding the position from 1976 to 1990, having previously being Ireland’s first European Commissioner. He also held cabinet positions in Fianna Fáil governments.

Dr Hillery will repose at her home this evening (Monday) and a funeral mass will be held at noon on Tuesday at St Fintan’s Church in Sutton, Dublin. She will be buried afterwards at St Fintan’s Cemetery.

Dr Hillery is s survived by her son, John; daughter-in-law, Carolyn; sister, Angela; brother-in-law, David, and four grandchildren. She is predeceased by her daughter, Vivienne and her husband, who died in 2008.

President Michael D. Higgins said,”I wish to express my deepest condolences to the Hillery family on the passing of Dr Maeve Hillery, wife of the sixth President of Ireland, Dr Patrick Hillery.

“Sabina and I have fond memories of our last meeting with Dr Hillery when she joined us here at Áras an Uachtaráin with her family to commemorate 75 years of the Presidency in 2013.

“She contributed greatly to the presidency of Dr Patrick Hillery, supporting her husband with integrity and dignity throughout his two terms as President. As an anaesthetist she was recognised as a dedicated and committed professional and as a mother and friend she was known for her warmth, strength of character and generosity.”