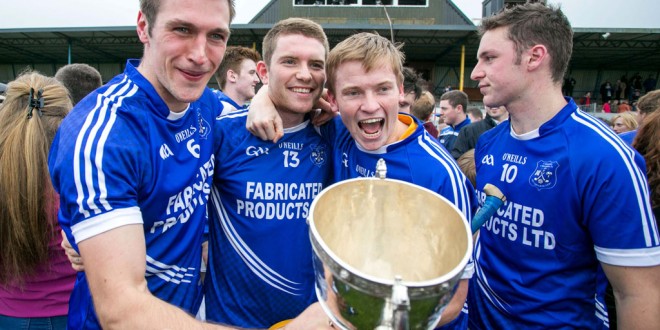 Conor Ryan, Cathal McInerney, David Collins and Shane Gleeson will be hoping for another magic moment on Sunday

Cratloe  and Éire Óg are certain that they are good enough to turn it on, come the 3.30pm throw-in on county senior football  final afternoon. Neither will spend much time this week worrying about their opponents. It’s hard to blame them. All each manager has to do is take a cursory glance around his respective dressing room. Each is full of vibrant, young footballers, who, if afforded a bit of space, can do damage.

Neither will adopt an overtly defensive strategy beyond playing a goalkeeper and six defenders. Éire Óg manager James Hanrahan has said that playing defensively is not in his or the club’s DNA. That said, it is possible to play a subtlety defensive game, without packing Cusack Park with defenders behind your own 45’. Éire Óg will surely play at least one defensive midfielder and work towards ensuring that their half-backs stay in position, no matter how deep their opponents might forage.

If the Éire Óg half-back line leaves space in behind them, they will run the perilous risk of handing Conor McGrath and Cathal McInerney the freedom in which to go on the rampage, while allowing players like Podge and Seán Collins and Oige Murphy to run at them from deep. Break one tackle and they could find themselves with the freedom of the park in front of them.

Éire Óg have the forwards to win but they must ensure their full-back line is afforded a degree of protection, without putting in place a full defensive shield.

The biggest decision Cratloe have to make this week is if and where to start John Galvin. A proven footballer at the highest level, Galvin isn’t a typical Cratloe player. He simply doesn’t have the legs or movement of his new colleagues. It must be remembered that his start against Cooraclare was his first for the club but that said, he didn’t look comfortable at centre or full-forward. Galvin’s best position is at midfield but Cratloe are not going to make a change there. Fergal Lynch and Cillian Duggan have emerged as pivotal men in the middle and are central to Cratloe’s drive for two football titles in successive years. Neither are flashy but they do the simple things well.

Cratloe might again opt to start Galvin in attack but the alternative of introducing him 20 minutes from time could be a viable proposition. Cratloe didn’t bring on any substitutes in their semi-final win over Cooraclare, which suggests they are not fully confident in their options on the bench. Having John Galvin in reserve could be a game-changing piece of arsenal, if they go for that. If that happens, Liam Markham would return to the half-forward line, Enda Boyce would start at wing-back, while Shane O’Leary could be recalled at corner-back.

One hundred years after Ennis Dals won the only on-field championship double, Cratloe know they have the players to make it happen. Their big game experience and proven temperament is a huge obstacle for Éire Óg. That said, the Townies never lack confidence and in Davy O’Halloran, they have a centre-forward who has had an outstanding championship. His vision, movement and work rate is admirable and he will be a key player on Sunday. His peripheral vision is impressive, as is his ability to find a man in red with a 50 yard pass. Darren O’Neill has been going well at midfield, while Ciaran Russell was magnificent in the semi-final win over Kilmurry. Driving forward from centre-back, Russell tore at Kilmurry and more of that will be needed if Éire Óg are to win.

An open game is very likely but one in which free-taking could be pivotal. Both Seán O’Meara and Cathal McInerney are well capable in this regard and will need to nail most of any kickable frees they are presented with.

A century after the last senior double in Clare, can Cratloe carry it off? The short answer is yes.

Rightly, they are not talking about the prospect of winning the double but they know that they have what it takes to win this match. Then they can reflect on the broader achievement. An Éire Óg win would not be a big surprise but Cratloe’s artillery looks a bit much for the Ennis men. Ironically, Éire Óg have a deeper panel of players but Cratloe’s main men can lead them to glory and a place in Clare GAA history books.