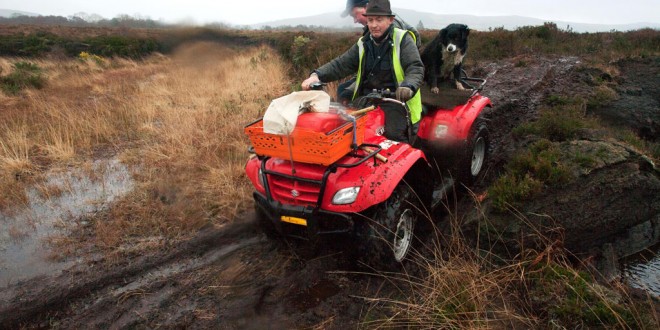 Ger Mulqueen (front) and James Peppard use the only means available to access their home through dangerous bogland. Ger’s 88-year-old mother is stranded in her home.

WATER levels in Dooras, O’Callaghan’s Mills have risen to a new high this week, as flooding along the access road reached the four foot mark.

With only a few days reprieve, residents of the four houses on this stretch of road have endured five weeks of surface water surrounding their homes.
One family moved out over the Christmas period and a second family has now made the decision to also move. Of those who remain, an 88-year-old woman remains trapped in her home.

Her son, Ger Mulqueen, is living with her and trying to maintain a farm, while another resident, James Peppard, continues to live there to look after his animals.
Locals have had to resort to using a boat to access their homes and to bring in meal and nuts to their cattle, as the road remains submerged and the bog behind them becomes more dangerous to traverse, with each rain shower.

Helen Mulqueen, whose mother-in-law is 88 and has been stuck at home since Christmas, said while she is in good health now, if there is any issue, the only way she could get out would be by helicopter.

“What they have to endure everyday is worse than Third World conditions. My mother-in-law was able to visit us on Christmas Day having travelled through the flood on a tractor.

“Since then, vehicles of any description cannot travel through the flood – instead they are walking across bogs, drains, dykes and so on and each trip takes an hour. They are now out of gas and several other products that cannot be carried by hand in these treacherous conditions,” she said.

She added that people now have access to a boat due to the generosity of a local, but her mother-in-law would not be able to travel by boat.  “It’s crazy. She is healthy but if she was to get ill or anything, a helicopter would be her only way out. There was only a couple of days of a let up and up to now, they have been going on foot across the bog and a quad some of the way,” she said.

It was difficult for them to get feed for cattle but as they have the use of a boat, that is becoming possible.

Local Councillor Joe Cooney said the situation is now a safety issue.  “The situation is very serious and dangerous. I’ve been onto the council engineers and as soon as the level of water goes down, they will see if they can get funding to carry out works into the future. They will just have to get funding.

“The O’Garney River drainage works need to be carried out, banks are needed at the side of the road and the level of the road needs to be raised and that needs to be done as a priority at this stage before someone loses their life. Something has to be done,” he said.

Noreen Moylan has a holiday home on the stretch of road.
“I was pretty scared when I saw the house and I was going through the bog on Sunday. I was up to my knees in water. It is about 20 minutes of a journey but it could be an hour if you got lost in it.

“James had been using the bog but the bog access is closing up now. We are 80% surrounded by lakes here anyway but when they flood, we are up to about 90%. When the water backs up, it backs up onto the bog as well. There is a huge danger coming through the bog now.

She said Dooras is “absolutely beautiful” and “a lovely place to live” but it is becoming one big lake.
“You are surrounded by lakes and green pastures and beautiful shorelines. All the fishermen and anglers come in this road in the summer from all over fishing our lake,” she said.

Martina Moloney made the decision to move out with her children over a week ago.

She is living with her sister in Broadford for the time being, but how long that will be is still unclear.

“We think we will be looking at another two weeks. It is the highest it has ever gone and we’re promised more rain this week. I don’t know what the story will be.

“My husband, Rory, has no choice; the animals have to be fed, so he has to stay there. The bog is getting too dangerous to cross now,” she said.