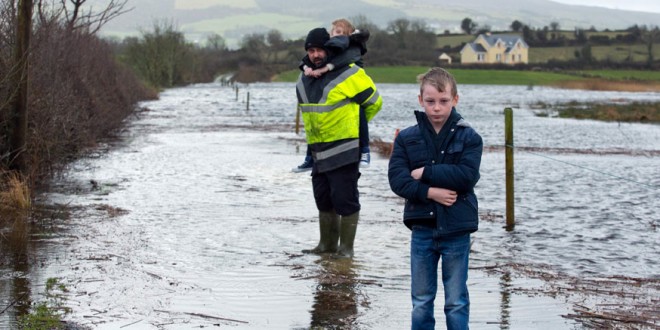 Rory Moloney with his eight-year-old twins, Caoimhe and Jack, at the completely submerged roadway to their home near O’Callaghans Mills. Photograph by Arthur Ellis

MORE than €240,000 is necessary to deal with damage caused in non-coastal flooding in the county, following the recent storms, and of that, €80,000 to €100,000 is estimated to be required at Dooras, O’Callaghan’s Mills.

According to a revised report issued at a meeting of Clare County Council last week, the estimated cost of repairs for non-coastal storm-related flooding remained at €240,000. However, additional costs are expected due to continued monitoring of flood levels, management of interim defence pumping facilities and construction of sandbag defences until early February.

This process, according to the report, is continuing due to ongoing intensive rainfall events and very elevated river systems.

In outlining the works required for the areas of non-coastal flooding, county engineer Tom Tiernan highlighted in the report that Dooras, O’Callaghan’s Mills has been cut off from services and the wider community since just before Christmas, due to flood inundation of the access road to them.

He states the requirements involved at this location include drainage works, road improvements and the provision of road boundary facilities.

Speaking to The Clare Champion, Mr Tiernan said the figure required to deal with the flooding issues at Dooras is estimated at €80,000 to €100,000 but pending further analysis of the road once flooding subsides, this figure could change.

He also said “the vast majority” of the interim pumping and sand-bagging budgeted for in the €240,000 estimate “is in the Ennis area, with a small component in South-East Clare”.

Commenting on the estimated funding required, Councillor Joe Cooney said, “Any money that’s given to improve the road is welcome. If there is €80,000 to €100,000 earmarked to raise the road and improve the boundary of the road and make the road safe, we would be happy with that. At least people would be able to use the road.”

Councillor Cooney said it is very disappointing that families have had to leave their houses and have been gone nearly three weeks with no hope of return this week.

He highlighted that the flooding issues in Dooras are now into the eighth week.

“In the interests of safety, they cannot go back in and even the farmers there had to get a boat last week to get the nuts and fodder into cattle and with the windy weather, that was unsafe at times. They did manage to get things in with a boat because the bog couldn’t be travelled with the heavy rain that fell so that was dangerous as well. Anything that is given is welcome. We would be hoping that the Office of Public Works would give funding towards the drainage works on top of this and again this will be brought to a satisfactory conclusion and that this would not happen again in the future,” he said.

While the water level has gone down slightly since it reached over 4ft deep last week, residents are still using the boat to gain access and they have also laid planks on sections of the bog to try to travel to lands.

“Really it is a serious safety issue at the moment and it is not acceptable for a family to have to leave their house three weeks ago and move into a two-bedroom house, where it was already overcrowded. It’s very unfair on the family,” Councillor Cooney concluded.