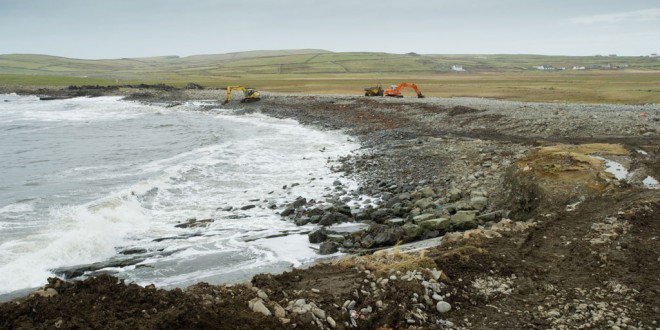 A report commissioned by the Doonbeg Coastal Erosion Group has estimated that it will cost €5.31m to carry out the necessary repair work in storm damaged areas in Doonmore (€1.7m) Farrihy (€1.85m) and Cloghaunincy (€1.76m), all of which lie within the west Clare parish.

The report was carried out by Fergal Coughlan BE CEng MIEI and has been submitted to Clare County Council outlining the damage caused by the early year storms.
The report said that proposed works in Doonmore, where the road surface and a number of houses were badly damaged, will involve the construction of a wall along Killard Road and also the construction of stone revetment to the sea side of same at an approximate cost of  €750,000.

Other work deemed necessary in Doonmore is the strengthening of the banks of the Doonbeg River and edge of Killard Road with earth embankments at an estimated cost of €180,000.

“These works would also involve the construction of a sluice to control discharge of waters from stream into the Doonbeg River at an estimated cost of €90,000 and the construction of stone revetment to protect existing land bank,” the report read in relation to Doonmore.

“In order to protect the land assets to the rear of the shoreline in Farrihy Bay it will be necessary to construct a defence from the continual coastal attack from wave action and also to provide controlled discharge of waters from the river entering the sea at the present sluice location. It is recommended that the existing sluice be re-built at a cost of approximately €150,000 and also to construct a revetment as described previously at a cost of approximately €1.75 million,” the report found in relation to Farrihy, where hundreds of acres of land were underwater for several weeks.

As for Cloghaunincy the report said that a reinstatement of the sluice is necessary along with the re-building of “Clahair” and reinforcement of it by means of stone revetments.

“As part of emergency works and to ensure protection is afforded to the area in the short term, around €650,000 would be envisaged to be required,” the report stated.