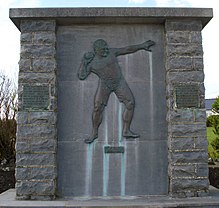 OLYMPIAN Pat McDonald is being warmly remembered in his native Doonbeg, 100 years after he earned a place in the annals of sporting history, by winning a second gold medal.

The Amsterdam Olympics of 1920 saw him reach the pinnacle of a long and illustrious sporting career. At over 40 years of age, when he took part in the world games in Holland, Pat McDonald still holds the honour of being the oldest Olympic track and field champion. Against rivals half his age, the towering 6’ 4’’ West Clare man was capable of throwing a weight of 56 pounds a distance of 11.26 metres, considerably further than his younger competitors.

Former teacher Joe Hurley has a huge interest in Pat McDonald’s achievements and legacy, and has researched the story in great detail. The path the young Clare man followed was a well-worn one that took him from the rural west coast to the bustling and brash metropolis of New York, at the dawn of the twentieth century. What makes Pat’s story unique is the prominence he gained from his unique physical prowess.

“Pat took his incredible strength from his mother’s side,” Joe explained. “She was originally Mary Breen from Lisdeen and she married Pat McDonnell from Killard. Young Pat would have developed his skills on the beach at White Strand, where young people would have spent their time throwing huge stones into the sea.”

Emigration gave the 20 year-old Pat a new life, but it also altered his family name. “When he and his sister reached Ellis Island, there would have been a fairly thorough medical examination, which could have resulted in someone being refused entry into America,” Joe said. “The emigration officers wrote their surname down as ‘McDonald’. The two were so happy to pass the medical that they said nothing about the error. The lived under the name all their lives in case they ever ran into trouble over their status.”

Around 1905, Pat joined The New York Police Department (NYPD) where his great physical strength made him an excellent officer. His talents were also quickly noticed in police force contests where he won many titles and came to the attention of the US Olympic authorities.

“He was a towering man and weighed 20 stone,” said Joe. “He must have been an iconic figure directing traffic in Time Square. He was a gentle giant too, by all accounts and very well regarded by those who knew him.”

Pat was a brave man on the field of play and in the line of duty. He also saved three people from drowning when he was off duty, though relatively little is know of this incident. His first opportunity to join the American Olympic team was in 1912, when he took gold in shot putt in the Stockholm Olympics. Eight years later, he struck gold again in Antwerp and in 1924, he was honoured by being invited to carry the American flag into the Olympic stadium for the games in Paris.

Over the course of his life, Pat returned many times to his native place. “He loved to come home,” said Joe. “Killard is the home of traditional music and set dancing and women took great pride in being able to say that they had danced a set with Pat McDonald. This was the era before dance halls and ballrooms. There were three fiddlers, known locally as ‘The Three Tommys’ and they were great entertainers at the time.

“When Pat would go to mass in Doonbeg, people would line up outside to see him, he was such an impressive and towering figure.”

Pat’s sporting achievements continued even after his Olympic career ended and he was winning US national titles into the early 1930s. He retired with the rank of police captain in 1946 and continued to live in New York.

Twenty six years after his death, at the age of 75, a monument was unveiled in his memory in Killard.

“The base was built by Jim Normoyle and the figure fashioned by James Connolly,” Joe explained. “Pat’s son who is a doctor contributed to the project and one of his nephews came back to Doonbeg in 1980.”

In 2012, there were great celebrations in Doonbeg, when Pat was inducted into the US Track and Field Hall of Fame and this year, despite the restrictions, there are hopes of reviving his memory. A restoration committee, which also includes Tommy Comerford, Jim Clancy and Michael Haugh, are keen that the legacy of the legend be remembered for generations to come.

“We regard him as an outstanding person born in Doonbeg,” said Tommy. “His achievements are truly remarkable, not just in a local context, but nationally. We are so proud of Pat and want to share his story with people so that he continues to be remembered. Restoring the monument is part of that and we will also commemorate Pat in whatever way we can, in line with the restrictions.”

Fiona McGarry joined The Clare Champion as a reporter after a four-year stint as producer of Morning Focus on Clare FM. Prior to that she worked for various radio, print and online titles, including Newstalk, Maximum Media and The Tuam Herald. Fiona’s media career began in her native Mayo when she joined Midwest Radio. She is the maker of a number of radio documentaries, funded by the Broadcasting Authority of Ireland (BAI). She has also availed of the Simon Cumbers Media Fund to report on development issues supported by Irish Aid in Haiti. She won a Justice Media Award for a short radio series on the work of Bedford Row Project, which supports prisoners and families in the Mid-West. Fiona also teaches on the Journalism programmes at NUI Galway. If you have a story and would like to get in touch with Fiona you can email her at fmcgarry@clarechampion.ie or telephone 065 6864146.
Previous Inclusive Athletics Is On The Right Track In Killaloe
Next Council to appoint new contractor to complete County Library project