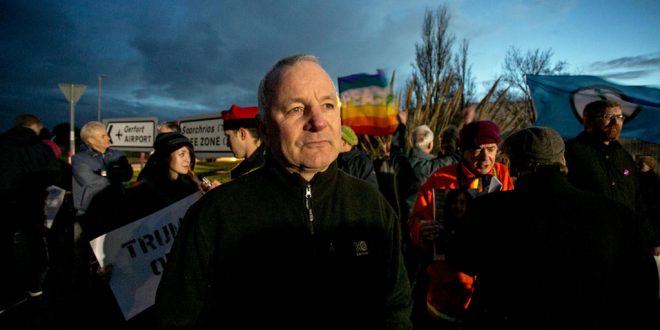 ONE of the world’s leading newspapers has cited US President Donald Trump’s unsuccessful attempts to build a coastal defence barrier at his Doonbeg golf resort as a major influence in forming his approach towards the European Union.

Washington Post writer Griff Witte has written, “For a man who loves to win, the defeat, just a month after his election as president, has left a bitter taste. And despite the motley nature of the resistance, Trump seems to have singled out a lone culprit: the European Union, whose rules and regulations underpinned many of the objections.”

The article was headlined Trump tried and failed to build a wall in Ireland. That could mean big trouble for Europe.
Last December, in a joint interview with The Times of London and German newspaper Bild, President Trump said that Doonbeg was a “magnificent property” but added, “Now, I couldn’t care less about it.” He made his comment in the context of his frustrations with EU bureaucracy.

“They were using environmental tricks to stop a project from being built. I found it to be a very unpleasant experience. To get the approvals from the EU would have taken years. I don’t think that’s good for a country like Ireland,” he commented.

Since he was elected, President Trump has handed over the running of his business empire, including his property in Doonbeg, to his sons, Don Junior and Eric.

Plans to build a 2.8km coastal protection barrier at the Trump-owned resort were shelved in December. Instead, Trump International has submitted an application to Clare County Council, seeking permission to place a sheet pile and rock armour on the seaward side of the golf course. The new proposal would protect an area 650m south and 250m north of Doughmore beach, next to the golf course.

Doonbeg International general manager Joe Russell has told The Clare Champion that if coastal protection work is not carried out in Doonbeg, the long-term viability of the business will be threatened.

“If we lose another 15m to 20m over the next 13 years, where is the golf course going to be? There is a fallacy out there that we can relocate holes elsewhere on the golf course. The space doesn’t exist,” he said.