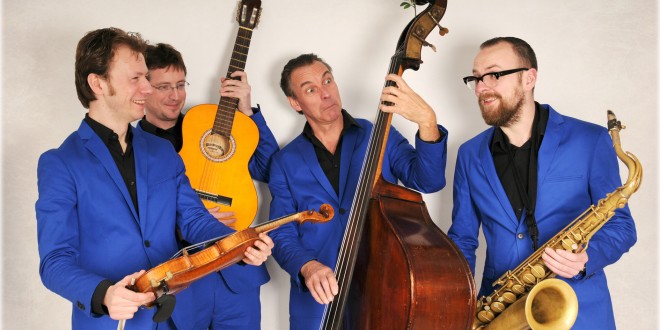 This year’s Doonbeg International Jazz Festival will be running in the village from May 30 to June 2.
Festival programmer, Philippa Siegrist, said there are several popular groups playing over the weekend, which should help draw a very large crowd to the West Clare village. “It’s our 15th year, which is brilliant, it’s amazing. This year, we have a band coming from Holland, called The Busquitos (pictured right), and they’re very good. We have a band from Scotland, called Jazz Main. They’re coming back, due to popular demand. The Paul O’Driscoll trio from Dublin are coming; we have Ace Minski. I play in a band called Skazz myself, who should be top of the bill!
“We have a children’s fun day on the Saturday and that will be free. We’d expect to have three, maybe four thousand people over the weekend. It’s great,” she said.
Philippa said the organisers try and make sure the music is accessible to everyone. “We try to keep this very mainstream so that everybody can enjoy the music. We don’t have too much serious, serious jazz, in that sense. We have music that everyone can relate to and dance to.”
Philippa has been involved with the festival since it started. “I have and it’s been great, I can’t believe it’s gone by so quickly. It’s been pretty much the same committee, a small committee, but we work very well together.”
At this stage, Doonbeg is fairly established in the jazz world and it isn’t hard to entice artists to come to West Clare. “I usually start planning for the coming year in about September or October. We start putting feelers out for bands, then everything sort of dies down over the Christmas period and we get into full swing around February.
“I have to say the festival is really popular now on the jazz circuit so I usually have too many people who want to play. Thankfully, we don’t have a problem getting bands at all.”
The festival brings a major buzz to Doonbeg each year, as the summer begins. “It’s one of our busiest weekends of the year and, since it’s been running, it’s always given a big boost to the village, both in spirit and financially.”
Next Friday, The Bosquito’s will be at the Igoe Inn at 10pm, while Jazz Main will be at Madigan’s at the same time, with Ace Minsky at Comerford’s. Skazz will be at Tubridy’s from 11pm.
Next Saturday morning will see children’s workshops taking place at the Community Hall from 11am. At 2pm, Ibridos will be at the Igoe Inn, while the Priestley Quartet will play at Madigan’s at 4pm. At 6pm, The Charms will be at Tubridy’s. Later in the evening, The Priestley Quartet, The Busquitos, Jazz Main, Jazz Lite, Skazz and Ibridos will all play at local venues.
On Sunday, the Downtown Jazz Band will be at Madigan’s at 1pm, Ibridos will be at Tubridy’s at 2pm, The Paul O’Driscoll Trio at the Igoe Inn at 3pm, the Downtown Jazz Band at Tubridy’s at 4pm, Skazz will be at Comerford’s at 6pm, Ace Minsky at Madigan’s at 7pm, The Busquitos at the Igoe Inn at 8pm, with Ace Minsky at the same venue from 10.30pm. Also at 10.30pm, there will be other groups performing at Madigan’s, Morrissey’s, Downes Bar and Tubridy’s. Ace Minsky will be at Madigan’s from 11pm.
The final event will take place on Monday at 2pm, when Ace Minsky play at Madigan’s.