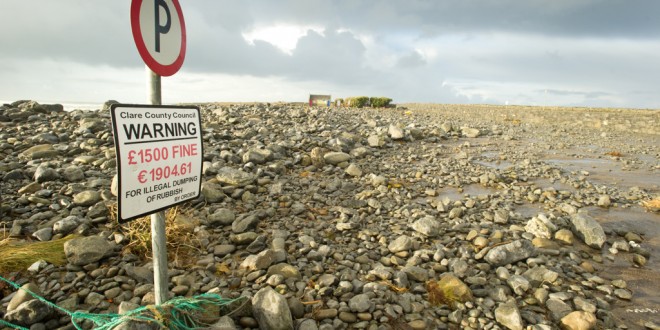 The car park at Doolin pier strewn with rocks following the storm. Photograph by John Kelly.

THE Doolin Unit of the Irish Coast Guard has been left unable to launch after a high spring tide and stormy conditions washed boulders onto the slipway and into the channel used to get out to sea.

Although the Doolin crew cannot launch, the Coast Guard helicopter and the unit on nearby Aran Islands are responding to calls.

Mattie Shannon, station officer with the Doolin Unit of the Irish Coast Guard, stated, “The boulders have washed up again and all the gravel the council had put in, that has been washed away. That will all have to be redone because there is no access to the slipway currently and there are a couple of big boulders on the channel, so we couldn’t launch.

“At the moment, conditions are rough but even if the sea calmed down, we still couldn’t launch because of the boulders in our path.”

The coast guard is currently building a new station at the pier and this was undamaged. However, the existing headquarters was once again submerged.

“It got flooded at the weekend and that is the third time in a month. It has flooded maybe four times in the last 20 years and now three times in a month,” he said.
Members of unit were on duty again throughout the weekend, ensuring the safety of those who came out to see the extreme conditions.

“We were out on Friday evening and on Saturday with the high tide at Lahinch and Doolin. We were there doing safety really and to be available, just in case anything happened. It didn’t do as much damage in Lahinch this time as it did last time but it is still severe. In Doolin, the work that Clare County Council did was all undone.

The prom and playground in Lahinch were again battered by waves and flooded but according to Nicola Hartigan of the playground committee there, the damage appears no worse than a month ago.

“We are waiting to hear from the engineer regarding the damage. I don’t think there is much more damage this time. Certainly the water has lifted the temporary matting that had been laid down but beyond that, it doesn’t seem much worse,” she said.

“We hadn’t done much work repairing it since the new year’s storm, just cleaning up really. We raised the wall again but couldn’t go much further because we didn’t have the reports from the engineer or figures on what it would all cost.

“Tús workers replaced the rubber matting that was lifted and the wet pour rubber slabs, they placed back down temporarily. Now the water this weekend seems to have just washed them up and sucked up what had temporarily been placed underneath them,” she added.

Ms Hartigan praised the local community for their help and also for their generosity in supporting fundraising efforts.
“People have been really supportive. It is extraordinary the support we are getting and people are very energetic in coming forward to fundraise with us,” she explained.

At the Flaggy Shore, local people have seen significant changes to the landscape after the weekend’s flooding.
Life-long resident, Roger Fahy said, “We are lucky, our home hasn’t been affected. The Martello tower, on the north of the peninsula; the road there has been decimated. That was a green road there and you could drive around it up to about 20 years ago but now you can’t even walk around it. The tower is totally isolated.

“The land there is going to start falling in. There was an acre of land at the back of the tower, now the shore comes right up to it. That was an area where people camped, where cattle grazed, now there is just the shore. We would like to see the tower, the shore and road leading up to it protected,” he added.

“If we don’t put back what the tide has taken from us, like the 20ft of road around the tower, it is gone forever. There will have to be a coastal erosion plan and rock armour put in place and there is no other way,” he added.

According to Mr Fahy, local farmers in the area are willing to donate the stone for rock armour for free.

“We have the stone on the land and we will give it for free to make rock armour, if the council gets the hymacs and diggers and let’s get on with it to protect the peninsula that is in it. We are not looking to make money out of it, we will give the stone for free, let the council provide the machinery,” he said.

“The amount of people who come and walk the Flaggy Shore, it is a unique place and a special place for a lot of people. It is a massive tourist attraction and with the Wild Atlantic Way coming on track, that will attract even more people. This work really needs to be done and we would like to see it done before the summer,” Mr Fahy concluded.

THE Mountshannon Arts Festival will take place this weekend, but not in its traditional format. …