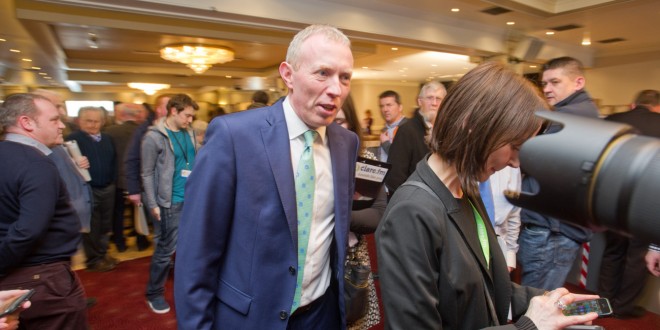 OUTGOING Clare Fianna Fáil TD Timmy Dooley arrived at the county centre in Ennistymon shortly before 5pm on Saturday. Deputy Dooley is expected to top the poll and hold onto his seat according to the tallies. As regards forming a coalition government, Deputy Dooley is adamant that Fianna Fáil will keep their pre-election promises and not enter into a partnership with Fine Gael.

“That has been thrown around for the last few weeks. There has been an awful lot of targeting of the two parties to resolve the government issue. There are going to be 158 people elected between here and Monday or Tuesday. There is a responsibility on everyone that gets elected to play a role in deciding who administers the state after this. In my view it should be down to policy platforms. We ran a campaign offering a change to the Irish people with a platform around investment in services and a platform that looked at spreading the recovery west of the Shannon and that it is based on fairness,” Deputy Dooley said.

“We have got a fairly strong mandate based on that. They myriad of Independents have a role to play. I don’t think that anybody who was elected has the luxury of saying, ‘I’m an Independent and I’m going to sit on the back benches and I’m going to be critical of all those things I have a problem with.’ I think it’s clear that if there is going to be a government, there will be a coalition of some formation. I certainly think that based on the commitments that we made prior to the election of not entering government with Fine Gael or Sinn Féin, that is not going to happen. I don’t see a situation where Fianna Fáil and Fine Gael will be in a coalition government together,” he maintained.

With Deputy Dooley, Dr Michael Harty and Deputy Pat Breen likely to be elected, the final seat is going to be a battleground, principally between Deputy Joe Carey, Michael McDonagh and Deputy Michael McNamara.
“While Joe Carey is 1,200 or 1,300 hundred votes ahead, there are a lot of big numbers yet to be distributed. Lets see how they play out. It will be a long night and it’s very hard to call that last seat,” Deputy Dooley said.