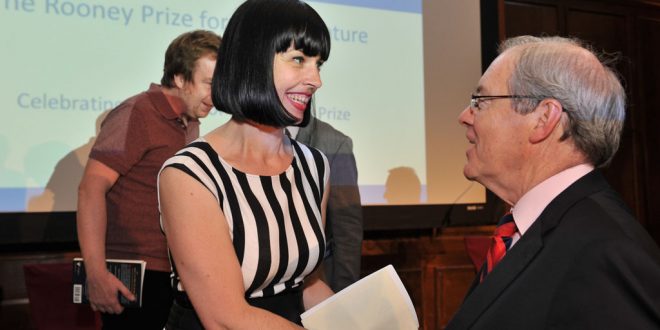 A CLARE writer has won the Rooney Prize for Irish Literature. Bilingual poet Doireann Ní Ghríofa won the €10,000 prize, which is awarded for a body of work by a young Irish writer that shows exceptional promise. The award follows the recent publication of her collection of poetry, Clasp.

Announcing the winner, Ireland chair of poetry and selection committee member Eiléan Ní Chuilleanáin said, “Doireann NI Ghríofa is a poet to watch, with a fresh view of the world: apparently ordinary houses, shops, common objects and activities. The sureness of her touch and the skill with which she handles language and shapes her poems are almost invisible but it is through them that she achieves the feat of making us look again at the usual and illuminates its pulsating strangeness.

“She is a brilliant addition to the distinguished succession of bilingual poets writing in Irish and English.”

Doireann said that contrary to some descriptions in the media, she is a Clare woman. “I’m from Kilnamona. My husband got a job in Cork, so we moved here eight years ago. I like living in Cork but I often find myself missing home.
“So much of my writing is inspired by and based in Clare. People refer to me as a Cork writer or a Galway writer a lot and I can’t help but correct them. I was born in Galway, it’s true, and I do live in Cork but I’m so proud to be a Clare woman.”

Accepting the award, Ms Ní Ghríófa called for a referendum on the eighth amendment to the Constitution and she subsequently reiterated that call.

“My writing addresses the connections between women and the female body. I feel that one of the most important challenges facing Irish women now is a referendum on the eighth amendment. No Irish woman of childbearing age has ever been allowed a vote on abortion. Yet we are the people who have to live with the bodily consequences. At the ceremony for the Rooney Prize for Irish Literature, I chose to read a poem in honour of all my sister Irish women, especially those who are forced to travel to England for this procedure.

“I don’t pretend to know what they are enduring; it’s not a situation that I have ever experienced but I am so ashamed that they can’t be cared for here. Irish women deserve better care. Whether people are pro-choice or anti-choice, and everyone is entitled to their opinion, I hope that we can agree that we deserve a chance to vote on this issue and to talk about it openly.”

She is clearly very proud of Clasp.

“I feel like I’ve been building to this book since I started to write and many of the themes explored here have been touched on in my earlier work; ideas of palimpsest, how the past imprints itself on the present, in the fabric of both rural and city life and how we choose to interpret or ignore that in our daily lives. While writing the poems in this collection, I was very interested in the liminal, in those floating moments that choose us or that force us to choose which way to turn and it’s only when we look back that we can see them for what they really were.

I wanted, in writing these poems, to examine ideas of small everyday jobs, of birth and death, of loss, joy and desire. I wanted, as well, to write poems of sisterhood celebrating the continuity of our shared experiences across generations,” she said.