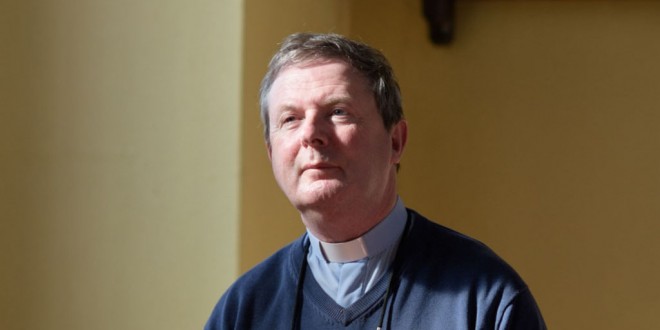 Fr. Tommy Marrinan of Gort who has been appointed to the Diocesan Chapter. Photograph by John Kelly

GORT parish priest Fr Tommy Marrinan has been appointed to the Diocesan Chapter, earning him the title Canon and meaning he will now act as adviser to the bishop and as a trustee of the diocese.

Bishop of Galway, Kilmacduagh and Kilfenora, Martin Drennan made the appointment on Thursday last. He announced that four priests were being added to the Diocesan Chapter, which now has 12 members. These canons work as advisers to, and in very close collaboration with, the bishop. They have a particular responsibility to ensure the effective administration of the temporal affairs of the diocese.

Other priests appointed on the day were Fr Ian O’Neill, parish priest of Claregalway;
Fr Michael McLoughlin, PP, Moycullen; and Martin Glynn, PP, Mervue and Good Shepherd.
According to Fr Tommy, the appointment is a reflection of the parish of Gort and Beagh.

“It is an honour for the parish, as it is a title usually given to a priest in a senior parish. It shows the esteem in which the parish here is held and, of course, the people who make up the parish,” he said.

Originally from Lahinch, Thomas Marrinan was ordained in Thurles in 1984. He was appointed as parish priest in Gort in 2008, having previously been chaplain in University College Hospital, Galway.
Fr Tommy has been a member of the Council of Priests, a representative body of clergy comprising elected and nominated members that offers opinion and advice when consulted by the Bishop as outlined in the Code of Canon Law, from December 2012 to December 2015.

“It is an honour to be given this position but titles are not what are important,” according to Fr Tommy, “it is people who are important and working with people and helping them along where we can.
“One of the main roles of the canons is as trustees for properties of the diocese, so I don’t expect the position to impact the parish or the people here in Gort. The Cathedral Chapter meets only for big decisions, so they don’t meet that often,” he said.