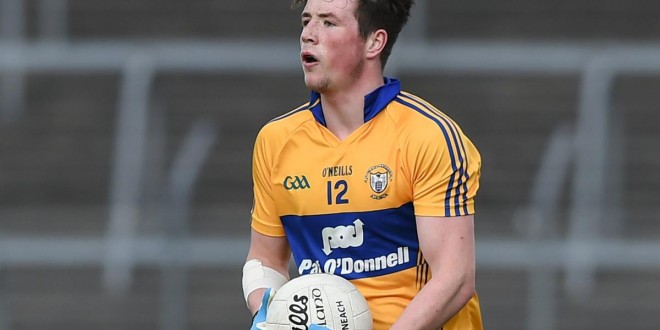 Keelan Sexton who is a key player for Kilmurry Ibrickane

CLARE football suffered one of its most devastating defeats in many years when the minors lost out to Tipperary by a single point in a pulsating semi-final in Thurles on Wednesday.

Playing heroically and with savage commitment, Clare led by two points, 2-9 to 0-13, with just two minutes left in normal time. However, a couple of mis-timed passes led to Tipperary kicking three late points to secure a dramatic win.

The Clare players and management were left distraught afterwards, having given so much and failed so narrowly to qualify for the county’s first Munster minor football final since 1994.

When Keelan Sexton put away a sublimely executed left-footed goal, less than two minutes into the second half, the scene looked set for Clare to score an era-defining win. Despite an array of excellent scores from Seán Malone, who put over two magnificent points, Sexton and Cillian Brennan, Clare did not put away Tipperary.

The Premier County’s corner-forward, Brendan Martin, was their main man, putting over 0-5 from play and it was his class that divided the teams at the end of a dramatic hour. Martin kicked the winner a minute into the signalled two minutes of injury time, less than a minute after Tommy Nolan and Jack Kennedy had landed mammoth scores from play.

Clare played with the aid of a slight cross-field breeze in the opening half. Generally, they defended with patience and discipline in the opening half and, in fact, were it not for late Tipperary points from Jack Kennedy and Shane Power, Clare would have led at the interval. Instead, they were tied at 1-3 to 0-6.

Miltown’s Cormac Murray put away a lethally finished goal in the 15th minute, following impressive work from Cillian Brennan, who turned over Tipperary wing-back Jack Skehan. That goal put Clare into a 1-0 to 0-2 lead. Up to that stage, Tipperary had dominated possession at at various spells as Clare struggled to retain their kick-outs.

Both teams operated with a sweeper and Liam Devitt filled the role for Clare. Niall McCarthy, normally at centre-forward, instead lined out at wing-back, with Devitt dropping back.

Unquestionably and despite the result, this was one of the best prepared Clare underage teams for many years.

On what was ultimately an incredibly disappointing evening, Clare had some heroic performances, with Pearse Lillis magnificent at centre-back, while Liam Devitt, Kieran Killeen, Darragh Bohannon, Cormac Murray in the first half and team captain Keelan Sexton all excelling. Killian Roche also made a great save half way through the second half.

As impressive as Clare were, it is Tipperary who have qualified for their fourth Munster minor football final in five years on July 5.

Previous INIS Fest at the Showgrounds
Next ‘Progress’ on mortgage arrears 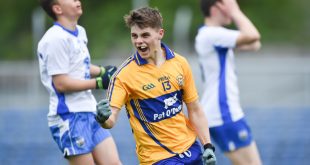