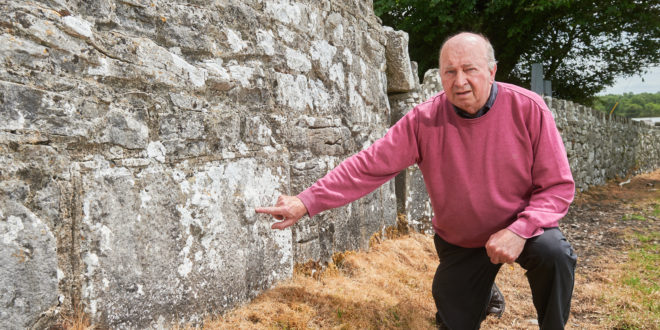 Surveyor Michael Houlihan points to a plague stone which is embedded in a wall at St Luctigern's monastic site at Fenloe, Newmarket On Fergus. Photograph by John Kelly

HOLY wells have long been a source of comfort in times of trouble, and in East Clare a monastic site, sacred to sixth century saint, has not only a well, but also a rare ‘plague stone,’ believed to cure disease.

“Luchtigern, a sixth century local saint was said to be able to cure any type of pestilence,” explained Quin historian and writer, Michael Houlihan. “His church and holy well stand on the northern shore of Fenloe Lake, a few miles southeast of Quin village. Keeping in mind that vaccines did not become commonplace until the mid to late nineteenth century, any type of contagion or airborne sickness took a huge toll on the local population. People did what they could to seek some kind of intervention. Many reached out to the saint.”

As a resident of the East Clare village, Michael has long been aware of the folklore of St Luchtigern. His current research on the holy wells of Clare has given him pause to reflect on ancient beliefs in the curative powers of their waters and the saints who were their patrons. In the case of St Luchtigern, the legend of his healing power is particularly strong.

“Embedded in an external wall of the graveyard at Fenloe is Luchtigern’s plague stone,” Michael explained. “The stone has two raised circles on it that are said to represent pustules noted during illness. One circle on the stone has a cross that people would trace with their finger when seeking help. Prayer and time spent at the stone improved the possibility of a cure.”

Michael’s research has also revealed that in 1832, during an outbreak of cholera in Ireland, John O’Donovan of the Ordnance Survey, a place-names scholar and antiquarian observed attendances at Fenloe. The antiquarian said that “People crowded in thousands to perform rounds at the plague stone, but whether its protective influence extended beyond the limits of its Termon or not, it would be very difficult to ascertain”.

The site of St Luchtigern’s Church also boasts some archaeological features, with an intriguing history. “On the wall opposite the plague stone are three fifteenth century Romanesque stone heads,” Michael noted. “They are at different stages of weathering. The three represent Luchtigern’s disciples. Local lore tells that their state of erosion is based on how much or how little the disciples believed in the saint’s ability to cure the plague.”

Saint Luchtigern’s Holy Well is one of more than 200 wells in County Clare which Michael is currently researching with the support of funding from Clare County Council and the Heritage Council. He has already published one book on the subject and the current project will involve a wide-ranging survey of as many sites as possible in Clare.

Michael credits Clare’s Heritage Officer, Congella Maguire, for supporting and encouraging the work. “Congella suggested an application for funding,” Michael explained. “Thanks to that, I’m now in a position to seek out and examine up to 240 wells. When I wrote the book, I picked out what might best be described as the low-hanging fruit. Now, I’m using maps with national monuments marked on them to seek out the others. Many of them are gone but there are still plenty of them remaining. One a single day, I was able to find four or five of them. I’m documenting details as to their patrons, the traditions around them, prayers and their condition.” To complete this work, Michael is appealing for information from those living close to the wells. “People are wonderful in this respect,” he said. “I really appreciate their knowledge. It’s essential to recording the stories of the wells.”

Anyone with details of holy wells in their locality can contact Michael by email to michaelhoulihan5@gmail.com.

Fiona McGarry joined The Clare Champion as a reporter after a four-year stint as producer of Morning Focus on Clare FM. Prior to that she worked for various radio, print and online titles, including Newstalk, Maximum Media and The Tuam Herald. Fiona’s media career began in her native Mayo when she joined Midwest Radio. She is the maker of a number of radio documentaries, funded by the Broadcasting Authority of Ireland (BAI). She has also availed of the Simon Cumbers Media Fund to report on development issues supported by Irish Aid in Haiti. She won a Justice Media Award for a short radio series on the work of Bedford Row Project, which supports prisoners and families in the Mid-West. Fiona also teaches on the Journalism programmes at NUI Galway. If you have a story and would like to get in touch with Fiona you can email her at fmcgarry@clarechampion.ie or telephone 065 6864146.
Previous Water outages in Miltown Malbay
Next Limited reopening for Bunratty, other Shannon Heritage sites staying closed