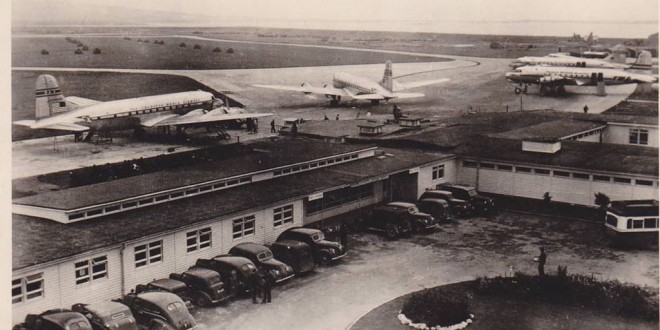 The early days at Shannon

MOST people in Clare will have grown up without thinking anything unusual about aircraft crossing the Atlantic from North America to Shannon every day of the week but when the first passenger plane made the journey on October 24, 1945, it was a massive event.

‘TRANS OCEAN FLIGHTS’ screamed the lead headline on the following weekend’s Clare Champion, with sub-headlines of ‘New Air Service to Rineanna’ and ‘Clippers Defy Gale’ beneath it.

The accompanying report said, “The Flagship ‘London’ of the American Airlines system landed at Rineanna at 3.30pm on Wednesday, thus inaugurating the land plane passenger service between America and Europe. Taking off from La Guardia Airport at New York on Tuesday night and calling at Gander Airport in Newfoundland, it flew the North Atlantic in half a gale in eight hours and twenty minutes. It was followed an hour later by a second Skymaster of the same Line.

“The Irish and American flags fluttered from the fuselage of the flagship which, with sunlight gleaming from its beautiful silver and orange streamlined shape, made a perfect landing. Two hours later it took off for Hurn, in Dorsetshire.”

At that stage, no one could have guessed how significant US visitors would become to tourism in the West of Ireland for generations to come.

Nor could they have known that the newly possible airlinks would see money from the booming US post-war economy coming to Ireland, as American companies used the Emerald Isle as a staging post for European operations. Indeed, the Shannon-US links, allied to Ireland’s tempting tax rates, are still vital for some of the Mid-West’s biggest employers.

While The Champion reporter of the day might not have known how important links would be over the next 70 years, he was well aware it was a big day in terms of global aviation.

“The start of this land plane passenger service between America and Europe is a great international event, which has aroused the keenest interest all over the world,” he observed.

Both the US and Europe were emerging from the greatest conflict the world had ever seen and there were elements on the other side of the Atlantic that had not been enamoured with the Irish stance during the war.

However, then Governor of Massachusetts, MJ Tobin, one of the passengers on the inaugural flight, struck a conciliatory note. Discussing Irish neutrality with reporters, Governor Tobin said, “I suppose we can say now that Ireland was neutral but she was neutral on our side”.

The Champion report also quoted JL Barry, foreign editor of The Boston Globe, who travelled on the flight and who said Irish neutrality was increasingly understood Stateside.

“We felt in America,” said Mr Barry, “that the failure of the Irish government to give us bases here during the war was costing American lives but the story was never told to us properly and British propaganda got in before the Irish.

“Now,” he continued, “that America was feeling disillusioned about the results of the war, they were again inclined towards isolationism. Ireland naturally was being looked upon with more esteem”.

Mr Tobin also alluded to the possibility of introducing regular Shannon-Boston flights in the near future. “He said that General Logan Airport in Boston was being extended at a cost of 15 million dollars and would be ready in about a year. It would be the nearest major airport in the US to Rineanna and direct flights would mean a saving of approximately 200 miles.”

Even on the day of that first flight, it was being made clear that there were plans to expand on the early US-Shannon links. “M Eaton, Vice President, American Export Airlines, who also travelled, said that in two and a half years time they would fly only Lockheed Constellation double-deck planes, taking 125 to 150 passengers, with accommodation for luggage. The company will have a daily service in operation before the end of this year and will use Constellation planes during the winter.”