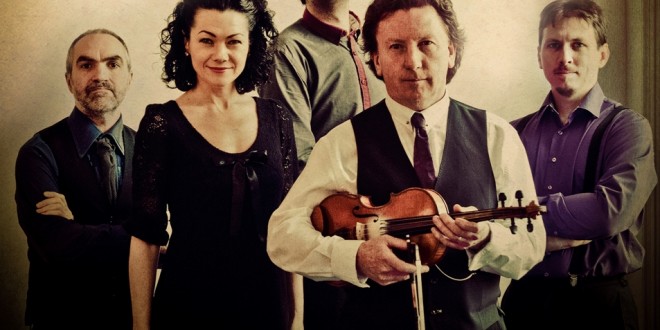 Frankie Gavin and De Dannan to perform in Kilkishen

Kilkishen Cultural Centre is delighted to launch into 2015 with a performance by Frankie Gavin and De Dannan on Saturday January 3 at 8.30pm.

For many years traditional super group De Dannan were the forerunners in the Irish traditional music world but after 33 years, 14 albums and a number of changes in the line up, the group disbanded in 2003.  A new De Dannan was formed by original founding member and world famous fiddle player Frankie Gavin which in his own words “will reflect a De Dannan of the 21st century”.

The new De Dannan line up is led by original De Dannan member Frankie Gavin on fiddle, flutes and whistles, Barry Brady on accordion, Colm O’Caoimh on Guitar and Vocals, Paul O’Driscoll on Double bass and vocals and with Michelle Lally on vocals. Frankie Gavin is the most celebrated Irish fiddle player of all time and has performed and recorded with rock legends The Rolling Stones, Jazz Legend Stephane Grappelli and world renowned violinist Sir Yehudi Menuhin amongst many others.

Tickets are available from Gleeson’s Shop, Kilkishen or by contacting 086-8680593. For further details on this event, please go to www.kilkishen.com and check out Kilkishen Cultural Centre on Facebook.

Carol Byrne is a reporter at The Clare Champion newspaper reporting on news in the East Clare area and the arts. She also covers the courts in County Clare and has received seven national awards for this coverage from the Law Society of Ireland and a National Lottery Local Ireland national media award for Best Community Story 2019. A Masters in Journalism graduate of NUI Galway, she also holds a Bachelor of Arts from the University of Limerick in Music and Media Studies, and a Higher Diploma in Irish Legal Studies. She began her career interning at The Limerick Leader and Clare FM, before taking up a full time post at The Clare Champion in 2006.
@@Carlsburn
Previous January show for Jigsaw
Next A busy Christmas for Childline