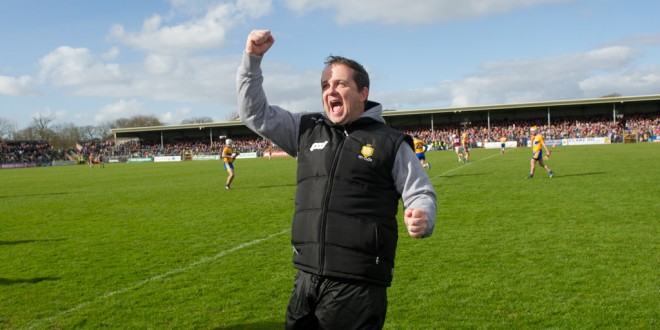 Sitting down to plan out Clare’s programme for the 2016 hurling season, manager Davy Fitzgerald underlined three goals – get out of Division 1 B, do well in the league, be ready for the championship clash with Waterford. It’s so far two-from-two, with the third objective looming large on Sunday.

The two league meetings have added to the game, Fitzgerald feels. “Waterford went on about frees the last day. Look at the stats in relation to the frees they had the last day and the day before, you will see that Clare came out at the wrong end of both of them. It was even enough the last day but we were well down the day before. Our possession was higher than Waterford.

“Waterford have a certain way of playing. It’s going to be very hard for this to be a high-scoring game, we got good scores the last day when there was very little space in the middle third to do anything. If you leave their bodies out there, they will hurt you. We have to go out and mark them man-to-man and then we have to try and get scores ourselves, which is tough. There is little between us. It’s a challenge that I am absolutely looking forward to.”

The Clare boss suggests the atmosphere will be interesting. “They are baying for blood but Clare aren’t going down there to make up the numbers. Just because they felt they were hard done by the last day, that’s their opinion, we are going there to get a result.”

Clare want to go the direct route to championship success. “100% we want to go direct. If it happens we lose, I will take the other option. Naturally, the less games you have the better. You don’t want to be relying on the back door. They said about us in 2013 and about Tipp in 2010 that we planned it that way, to go through the back door. That’s rubbish. We both wanted to win Munster.

“In 2013 I felt we were way more unlucky than people gave us credit for. If you look back on the goal attempts, we had five or six but we didn’t capitalise on any of them and they were clear-cut enough. When I look back on that, it gives me confidence. We will be trying like we were in the league. We hadn’t won a league in 38 years and it’s a massive achievement to have won it. We are delighted with that. It’s also a long time since we were in a Munster final. We would like to be in it but we know what we face.”

Ther Sixmilebridge man says there is no pressure on Clare because of the 13 unbeaten games. “Last year we couldn’t string two or three together. The difference this year is that we are making more tackles, more blocks. Lads realised we needed to get working hard. It doesn’t matter who is managing the team, unless you have a massive work ethic, you are not going to get there.

“Clare are back in the top bracket again and it hasn’t happened in a very long time. That’s something we are all very proud of and we would like to stay in that bracket for as long as we can,” Fitzgerald added.

“We have been down a number of guys for the last four or five games that would be key figures to us doing well. We have adopted the approach that this is an opportunity for somebody else and we have deliberately not gone about it in the media. We have deliberately tried not to talk about this player being injured and that one and we are going to adopt the same policy this week. We will be down bodies but we have fellas coming in. We just want to concentrate on what we have. We would love to have the lads but we don’t have them at the moment.

“One of the plusses this year is that fellas have stepped up to the plate. Since I came in, I always said I wanted to get Clare back to being competitive. Long before I came to Clare, I had a style in mind that would suit. We hadn’t played it at underage, we hadn’t played really short ball, we hadn’t played formations that are massive at underage. I had the luxury of trying it out at LIT, which is a massive plus. When we came in it took a bit of changing. I am delighted that it has helped us to be where we are and to build a panel that would be sustainable over a number of years. That is so improtant and it doesn’t happen easy,” Fitzgerald stated.

He said the 2013 All-Ireland came earlier than expected. “But when you get an opportunity, you take it. When we won back in the 1990s we were young but still two or three years more mature than most of the bunch now. I believe that this Clare team will be really hitting their prime in the next two or three years. That’s when you will see the best of this team if they keep that enthusiasm and drive. If you look at Kilkenny’s success it’s based around a team in their mid-20s or onwards. They can do it year after year because they are more mature. When you are 19, 20 or 21, you have a small tendancy to get your head turned easily and believe in certain things. We had to go through that process, we are going through it and hopefully we will come out the other side. At least we have a national title under our belts this year, which is massive. We have got to keep building on that and keep competing at the highest level.”

The Clare boss is in a better position than most managers to know about Waterford, having spent a number of years as the helm there.

“I actually got a lot of the young lads, eight or nine, that I brought on in my time, they are really good and intelligent lads. Derek McGrath, in his first year as manager, went through a tough time, they were trying to get rid of him. He figured out that he had to play a style suited to the team he has and he did that. He pulls a lot of numbers back the field. He has a cordon across the middle of the field, like a line where they nearly hold hands and it’s very hard to break it. They have the bones of seven or eight
defenders most of the tme. They work the ball out short, where they shoot from distance. Every now and then they will go long and try and get in as quick as they can on the breaks. That was done and designed by a very intelligent man who is trying to make the best of what he has and he has done a great job. We didn’t play that style down there, it was something similar. They are really good and smart hurlers.

“I wasn’t really sure the last day as we hadn’t come across that style before. They are too good at the short ball and shooting from distance. If we played a conventional 15 or anything close to it, we would be well beaten. We would like to be a lot more attacking, as we were against Kilkenny. We set up to make sure we can deal with what they have and try and counter then.”

Fitzgerald is particularly happy with the Clare supporters this year. “The support this year is fantastic. We have accepted there will be negativity in certain areas but that’s only by a small minority and always a small minority are loud. We have said forget about them and concentrate on the people who are coming out to shout us on. I love them interacting with the team. I don’t know whether we will win or not on Sunday but I know the way this family is and it is a family.”

Disappointed with talk about backroom team

“There is a lot of talk about backroom teams and it’s something I despise. I am very disappointed. We have a large backroom team and 90% of them would not take one cent for being involved with Clare. They do their jobs. They are here every night and work really hard.

“People do not realise what goes on behind the scenes. These lads give up so much for each other. When I hear people criticising them, it annoys me. We are trying to do the best for our county.

“We have not the biggest budget, we are not even close to any other budget. We raise money ourselves. We are very proud of it. I am very proud of our family who will do everything for Clare. I am also very proud of our supporters. They have helped us in games so much and we appreciate that. Its important we all stay together, win or lose,” he concluded.