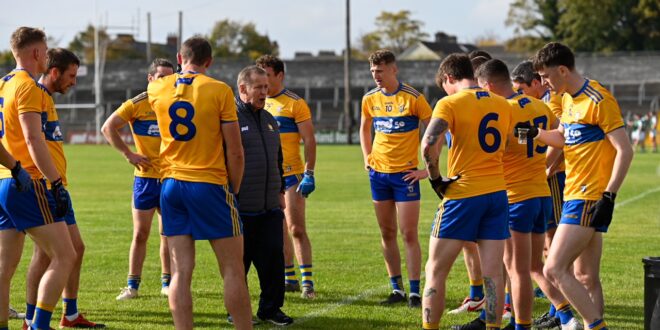 Clare boss Colm Collins talks to his players at the break in Cusack Park. Pic by Eugene McCafferty

The packed competitive nature of Division Two was never more evident than ahead of this weekend’s final round of games.

As things stand, six of the eight teams in the division are all still in the hunt for promotion to the top tier, while four are still looking over their shoulder at the prospect of joining Fermanagh in relegation.

From a Clare point of view, both fates are still on the cards but crucially, their fate in staying in the second tier for a sixth consecutive season is firmly in their own hands. The simple fact of the matter is Clare will cement their place in the division for 2021 with victory over Armagh, and it will come down to a plethora of results elsewhere to see if something more than that awaits.

With all that to consider, the focus for Colm Collins and his management team will be on one very simple task this week; performance. That is all they can ask from their group of players but there will also be the realisation that a repeat of last weekend’s performance will not do this time around. There was more than a touch of fortune in the manner in which Fermanagh passed up blatant goal scoring chances, and with minutes under the belt from the bench it remains to be seen if the likes of Sean Collins and Kevin Harnett are in the starting line up this weekend to shore up the defence.

Some sloppy use of possession, which led to nine wides last time out, will also have irked management, particularly at this level where cheap turnovers can often prove fatal. Poor shot selection and wayward passing is something that will have to be addressed while discipline in the defensive third has to be paramount.

Armagh will come to Ennis stinging from a poor performance last weekend which them pass up the opportunity of sealing promotion after a disappointing home loss to Roscommon. Kieran McGeeney’s charges are still in control of their destiny as a win in Cusack Park will see them go up, but that could have already been decided had they won in the Athletic Grounds. The O’Neill duo of Oisín and Rian shared 0-9 between them on the night, so getting to grips with their threat will be key.

Enda Smith’s brace of penalties came from sloppy defending by Armagh, something Kieran McGeeney will no doubt be disappointed with. It also showed a weakness in the Orchard County defence that Clare will hope to exploit as they struggled to contain a direct running style. Joe McGann, Jamie Malone, Keelan Sexton and Gary Brennan will all hope to test how Armagh cope when taken on at pace, with McGann in particular a central focus for that task.

Having the game at home is an obvious bonus and while the crowds might be absent, there is still a lot to be said for being on your own patch. There is even more to be said for being the master of your destiny and Clare should be able to find that extra gear to at least guarantee survival before turning attentions elsewhere to see what is unfolding.