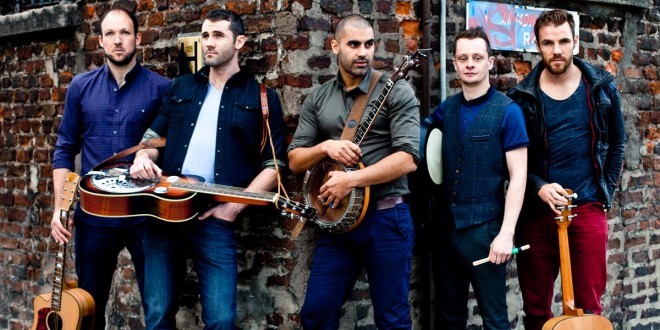 HERMITAGE Green are about to tour a number of Irish venues and they will be coming to Glór in Ennis on next Saturday night.

While often referred to as a Limerick group, percussionist Dermot Sheedy is from Darragh and he spoke to the Champion last week from Nashville, where the group were working.

“We were in Vancouver for a week, we played two gigs there for Celtic Fest and we came to Nashville the other day. We’re working with loads of loads of different producers and labels over here to see what we can do. We’re writing a lot of songs and laying them down, it’s basically music heaven over here, two of the lads were at Music Row yesterday which is like a big housing estate where every house is a studio. We’re having great craic over here, there’s a lot of work but hopefully it’ll bear fruit.”

Most people associate Nashville with country, but he says it has become a hub for all types of musicians now. “It’s changed a lot, everyone has moved over here now, The Kings of Leon are living here, Ed Sheeran, loads of different people.”

He said that the visit back to his home county will be one element of a very busy few months for the five-piece. “We’re doing quite a big tour of Ireland, a theatre tour and the end of it will be Saturday in Ennis. We’re doing Kilkenny and Thurles but Glór on April 5 will be the big one. We’ve the Academy in Dublin, we were supposed to do it last month before we went but we had to cancel it because two of the lads got laryngitis, Barry and Dan, the two main singers so it wasn’t going to work out. We’ll be in Wexford, we’ll hopefully have a gig in Limerick at the start of May, we’ll be in Mallow, we’ll be in Waterford, we’ll be in Dublin, we’ll be in Galway. April will be busy and then in May we’re going out to New York, doing an Irish festival. We’ll be in Boston too and then the festival season will be starting all around Ireland.”

While they have been confirmed for some festivals, their full summer schedule is far from completed.

“They (the festivals) come in quite late for a band like us. They only pitch to the big bands in February and March and then they kind of come to the ones in the middle. We’re confirmed for Sea Sessions and Wave Masters, there’s a few more that I don’t think we’re allowed talk about yet!”

The work being done in Nashville should form part of the basis of an album to be released after the summer.

“We’re just writing and picking songs now. We released a live album around the start of December and we just wanted to get a product out there because we hadn’t released anything in a year. We did it live at Whelan’s in Dublin and there are probably one or two off that which will be brought into studio and recorded but the rest will be completely new. I’d say you can expect an album in the autumn.”

“It’ll sound like Hermitage Green always were supposed to sound like. When people try to describe us it’s kind of a hard one, we’re staying away from that Mumford and Sons label, it’s an easy, lazy kind of way of describing us because there’s acoustic instruments and five lads and there’s a tambourine in the mix. We’ve added in lots of instruments, everything from five-string banjo, tenor banjo, to bass acoustic guitar, piano, drums, bodhrán. There’ll be something for everyone really.”

The bands profile has certainly grown over the last year and a half and he says their audiences are becoming a bit more diverse. “We’ve seen a rise in the amounts of people in their 40s, 50s and 60s coming to our gigs and when that happens you know you’re doing something right when people like that are coming to your gigs.

“Because we started gigging as a Limerick pub band we would always have been associated with that kind of thing and we tended to attract that early 20s female audience, but we’re delighted to see it growing. We feel this album will cut across gender and ages and there’ll be something for everybody.”

While the group have built up a respectable following, they need something to bring the momentum up a notch, he feels; “We’re trying to write that radio hit as well to get to that next level. We kind of achieved a certain level in Ireland and can sustain ourselves gigging all over the country but the next level is to get that hit!”

In recent months the band have been writing songs together, a process he says works quite well even if it takes a while.

“Dara Griffin was always the writer, the main writer and he would have written all our main songs that people would know and Dan (Murphy) would have contributed a good bit. In the last while Darragh Graham, who plays the djembe and banjo, would have contributed a good few. Then in January we had our first writing session with all five of us. It just took that long for us to develop as a band and be comfortable enough to have a go at each other in a room and let it all out. In January we wrote a new song called Big Ben that we’ve been gigging for a while and that was one we all wrote together. We have two others written as well. It’s a good challenge and you really feel the reward. It takes a lot longer than writing on your own. You have to wait for everyone to get their point across.”

They are able to work together without having one main man. “We’re quite democratic actually, we’ve no real Bono,” Dermot jokes.