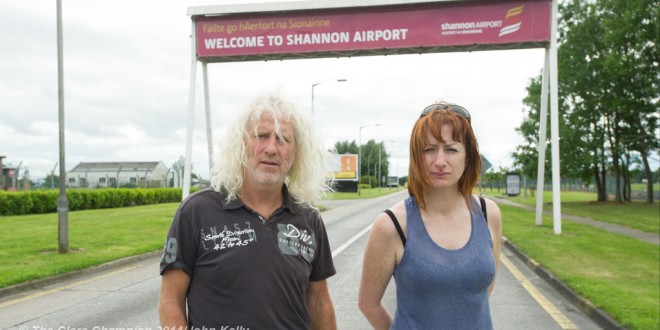 TD's Clare Daly and Mick Wallace in Shannon shortly after their release. Photograph by John Kelly.

SHORTLY after being released from Shannon Garda station this afternoon, TDs Mick Wallace and Clare Daly relaxed with drinks in a local hotel.

Both had been detained and later released without charge after climbing the perimeter fence at Shannon, attempting to make their way to two US military planes at the airport.

Clare Daly’s upper lip was still bleeding heavily around two hours after she cut it when falling, as she sought to clear the airport fence.  “I flipped over in my panic! And I fell on top of him (Wallace). I cut me hands as well. I was probably afraid of falling back so I fell forward. It could be worse, it’s nothing to the slaughter of other people.”

While they had fallen foul of the authorities, Ms Daly was complimentary of all those she had dealt with at Shannon. “In fairness they seemed to cop it fairly quick. All of the staff and the airport police and fire service and the gardaí were very disciplined and professional.”

She denied that the incursion onto the runway had been dangerous. “We knew there were no flights arriving at any time like that and we knew the (US)  aircraft were there, the Hercules and the executive jet. I think the Nuremberg principles would say there was a bigger cause to fight. Sometimes it is necessary to break minor laws to fight a bigger fight, which is the massacre of innocents and the continued use of Shannon by the US military.”

Ms Daly claimed that they had tried all conventional methods of raising their concerns about the US military use of Shannon.  “We’d been at the court cases with Margaretta D’arcy, we’ve raised this with every relevant minister and we’re getting no satisfaction at all as parliamentarians. When it’s before the courts the judges say ‘ye’re parliamentarians, let parliament sort it out by law.’ We spent hours with Leo Varadkar the week before last on the issue as well and we felt we had no alternative.”

Mr Wallace also claimed they had been stonewalled by the Government.  “We’ve been raising it for three years and the last time Eamon Gilmore and Alan Shatter addressed us about it they said they didn’t believe there were arms on the planes, the Americans said there wasn’t and that if we thought otherwise there was no point in saying it without evidence.

“We said the only way to get evidence is by going down ourselves, we’ll have to get in illegally, but under the Nuremberg principles sometimes people have to break the law to do what’s right and we feel very strongly about the fact that Shannon Airport is being used for US military purposes because it makes us complicit in incredible atrocities that the US is involved in the Middle East and beyond.”

He also denied that they had put public safety at risk. “We would not have crossed any areas that put people at risk in any way. We spent most of the time on grassland trying to get to the planes and didn’t interfere with aircraft in any way. We also wore high vis jackets, which probably meant we were identified more quickly.”

Asked if there was any serious possibility that they would have been able to establish if there were any arms on the planes, he said, “We know for a fact that planes have been open while on the runway, we have eye witnesses who say that. You wouldn’t expect them to bring guns into the airport lounge.I’d say we were about two minutes from the planes when we were stopped, whether the planes were open or not I don’t know, but I would love to have gone and found out for ourselves if there were arms on board.”