Home » Lifestyle » Daithí’s on top of the world 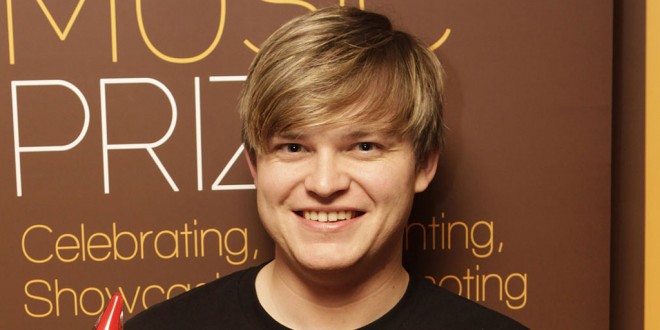 ONE of the most interesting tunes you’ll hear on the radio this year is Ballyvaughan musician, Daithí Ó Drónaí’s Mary Keane’s Introduction.

The track features Daithí’s grandmother, who is in her 90s, talking about having “several boyfriends” in her youth, resisting efforts to be set up with a Carron farmer and how she met her future husband in Kilfenora.

Her words and laughter, combined with her grandson’s dance music, make for a sound that is absolutely unique and the track won Daithí a nomination for the Choice Music Prize Song Of The Year award.

If you haven’t heard it yet, it’s well worth looking up on YouTube or Spotify.

Speaking about it last week, Daithí said he wanted to push the limits of dance music a little, and do something with a strong theme. “That track was a weird one. I was writing a new EP and I had just finished a very strong pop album. I was getting a bit alienated from it, it just seemed a bit unfeeling. There wasn’t a huge amount of me in it, I guess. I wanted to write an EP that was a bit more about me and more influenced by where I was from.”

His grandmother had been recorded by someone looking at making a radio programme interviewing people from various counties and Daithí felt it would be perfect as a statement of intent about the new EP. “I came across that interview with my grandmother and it seemed like a perfect introduction to the EP. It’s very much about me and where I’m from and I think it really kind of sums up what it’s like in North Clare.”

While he was pleased with the track, he didn’t expect it to get the reaction that it has. “I put it out as an intro track, rather than a single. I didn’t expect it to be liked as much as it was. I think people can really relate to it. I get a lot of messages from people who say their grandmother is just like that. I think it’s a very relatable thing, which is great.”

While the track is a uniquely Irish audio experience, due to Mary Keane’s voice, Daithí says mixing music and speech has long been part of dance. “Dance music does have a good tradition of spoken word in it and it just felt right, the way it fills up into a point and then turns into a big full-on dance tune. It’s very like what I write usually, just with a more Irish spoken word slant.”

He had enjoyed hearing his grandmother’s stories about the past before but how she met her husband was a new one for him.

“With that thing in particular, about how she met her husband and everything, she never really talked about that. When I heard the interview, it was really incredible; there was so much feeling in her voice. That’s something that doesn’t really happen that much in Ireland, we tend to be very guarded as a people with a lot of our feelings. It was just crazy hearing that and it was one of the main reasons why I picked it.”

Originally from Ballyvaughan, Daithí is a grandson of Chris Droney, the well-known concertina-player. As a youngster, he played the fiddle but moved towards other forms as he got a little older, although it is still an influence.

Twenty-six years old now, he says he is trying to make a type of dance music with completely authentic sounds.

“For this EP, I did a lot of recording of different areas, getting nature sounds and stuff. That one has sea sounds from down around the West End in Galway, then there are other tracks with recordings of my dad’s farm in Clare mixed into the tracks. That’s kind of where I’m heading at the moment. For my next EP, I’m recording a lot of sounds and mixing them into the dance music.

“A while ago, I went up to Donegal and was playing a gig there for one night but I spent two or three days there, travelling around, looking for different areas, trying to find recordings, then looking up the history of the area, basically finding people who played music there, find those samples and mix them into the music as well. It’s very much trying to take the history and culture as well as how it is now and trying to mix it into the music.”

From his own point of view, Daithí felt it was important that he use a bit more innovation because his interest was waning.

“When you’re writing dance music, you’re spending most of your time sitting in front of a computer, messing around with different sounds and stuff. I was finding that I was getting quite bored with it. You’d open a folder of 100 snare sounds that you got off the internet and have to pick one. Now, I feel that if I go out and find stuff, actually go on a journey and find sounds and record them myself, I’ll have a story behind every single sound I put in a track. Instead of just downloading a drum sound from the internet, if I make a drum sound somewhere interesting in Ireland, when I look back on that track, I’ll value it way more because I went out of my way to do something interesting with it.”

Dance music can alienate people; many find it repetitive or feel it is superficial and it generally doesn’t have widespread appeal across different ages.

Daithí recognises these issues and feels that’s part of the reason that Mary Keane’s Introduction has made such a stir. “Dance music is kind of interesting. There are one or two feelings that are really well associated with it, like when there’s a really good dance act on and a really good crowd, there’s this big feeling of euphoria and I think dance music is trying to chase that at all times.

“Apart from that, there isn’t a huge amount of other stuff, so adding in stuff that people can relate to is an interesting way to go about it, because people don’t really expect it. I guess that’s one of the reasons Mary Keane’s Introduction did so well – because people weren’t expecting to hear that on a dance track.

“It introduced my music to a whole pile of people who I wouldn’t have expected to be interested in that music; a whole other audience got into that track. It’s really good because a lot of people wouldn’t rate dance music as a credible form. It’s really inspiring.”

Things are very much on the up for Daithí now and he feels the things he has tried to do differently have made an impact. “In the last year, there has been a change. There are a lot more people going to the shows and stuff. There are some really great fans out there now, who are super, super supportive. We had the launch of the EP in Galway and there were people travelling from Dublin for it.”

Miles of Memories in the Burren