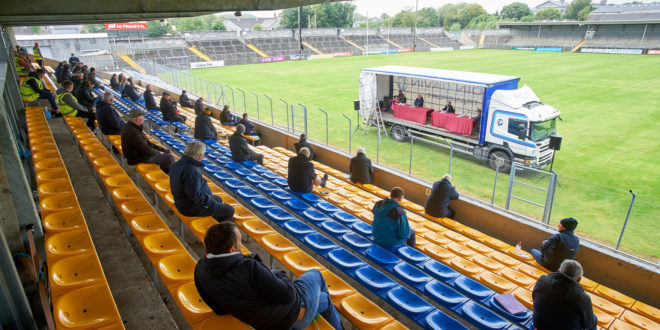 Cusack Park, Ennis,, which is being used as by the HSE as a Covid-19 test centre. Photograph by John Kelly.

MORE than 1,000 Covid-19 tests have been taken in Clare over a four-week period, according to new figures released by the Mid-West HSE.

The HSE has confirmed 1,055 tests for the virus were carried out in Cusack Park from July 20 to August 16 and it previously confirmed there were more than 1,000 appointments at the drive through community test centre at the county GAA grounds of Cusack Park from April 23 until early June.

It looks as if the recent growth of cases in has slowed to an average of about two a day after a significant spike in previous weeks.

A few weeks ago, Clare had a very low incidence rate of Covid-19 with only one case recorded between May 31 and July 23.

However, this has deteriorated into the fourth highest in the country at 28.6% per 100,000 of population based on a 14-day analysis of data up to Sunday, August 9.

Responding to Clare Champion queries, a spokesman for the Mid-West Primary Continuing and Community Care confirmed it doesn’t have any input or authority to recommend that a similar lockdown should or shouldn’t take place in Clare.

The spokesman directed queries about the average length of time to get a test result for a patient from the time a swab is taken and the average contract tracing turnaround time to NPHET and the Department of Health Press Office.

The national HSE outlined between August 12 and 19, the national time frame for the swab to lab result is 1.2 days.

Negative results are sent within a few hours of laboratory results. Positive cases receive a phone call within 8am-8pm hours.
The Cusack Park community test centre opened April 23 last and the Covid -19 test is an appointment based service following a referral completed by a GP, out of hours GP services such as Shannon Doc and Occupational Health department.

Once a referral is received appointments for testing are completed on the same day or next day appointment.

Referral criteria are sudden experience of one of the following symptoms and there is no other cause – fever, cough, shortness of breath and loss or change to sense of smell or taste or if identified as a close contact of a confirmed case of Covid-19.