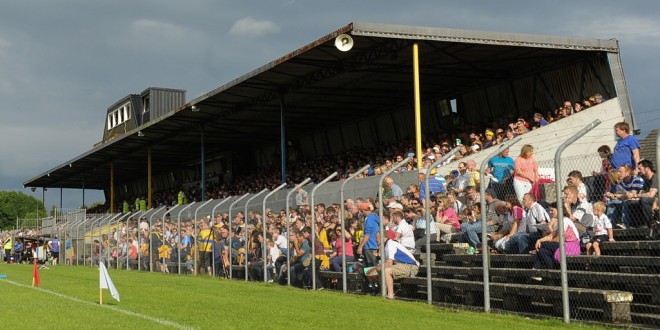 An upgrade of the existing stand at Cusack Park is among the works planned.

AN ad-hoc group, representing Clare people with disabilities, has secured a compromise as regards their seating accommodation in the plans for the upgrade of Cusack Park.

In the plans being prepared by the Clare County GAA Board for the revamp of the stand at the county grounds, areas at either end of the stand were initially earmarked to accommodate wheelchair users.

However, people with disabilities, who are loyal GAA supporters, were incensed with this proposed positioning, leading to a meeting on Monday night with officials of the county board at which a compromise was reached.

Under the new plans presented to the group, wheelchair users will be facilitated with 22 disability accessible seats and 22 seats for carers in a position between the 21m and 50m line on the Cloister side of the stand.

In addition to benefiting from covered accommodation, wheelchair users can now look forward to having a much better viewing point on big match days in Cusack Park.

Ultimately, however, a lot will depend on what decision the local planning authority makes, following the expected submission of revised plans by the county board.

Strong objections to the initial plans were lodged with the county council by people with disabilities and those representing this group earlier this week. Concerns about the impact of the original plans on people with disabilities were expressed at the one-hour meeting on Monday by Councillor Ann Norton, Ann Enright, (Clooney Quin), Noelette Barry (Ballyea), John Slattery (Bodyke) and John Minogue (Ennis).

The Clare County GAA Board was represented at the meeting by secretary, Pat Fitzgerald; vice-chairman, Councillor Joe Cooney and Niall Fitzgerald from Hogan Lynch Consulting Engineers, Cork.
In addition to expressing their dissatisfaction to the council, the group also made representations to the county board, which prompted Councillor Cooney to arrange the meeting in an effort to work out an acceptable solution to both parties.

Councillor Norton explained the initial plans were unacceptable because it would be difficult for anyone, able bodied or disabled, to watch a game as the viewing vantage point was “very poor”.

She said it could only be considered as even worse for a wheelchair user or someone with a disability.

“Hopefully, lessons can be learned from what happened in relation to this matter. We now want to work in co-operation with the GAA to help provide facilities for people with disabilities, who attend games on a regular basis,” she said.