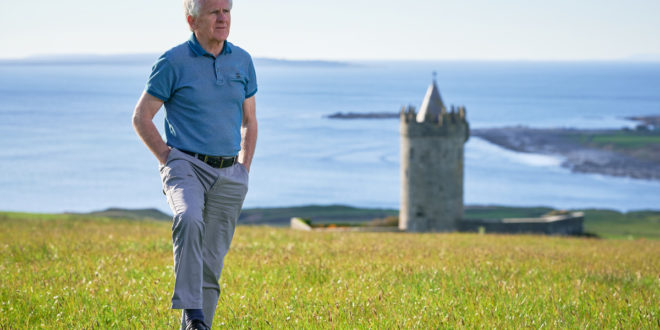 2020 will always be marked in the annals of St Flannan’s College long and storied sporting history as being the year they ended a long wait for their latest Munster hurling glory.

It also marks a milestone in the history of the football tradition of the school, with 25 years having elapsed since they last claimed the Corn ui Mhuiri title on a dramatic day in Charleville.

That gap looked like it was moving one step closer to being bridged this year as a brave effort from the Clare men just came short in their last eight showdown with St Brendan’s Killarney, who were ironically the team they beat in 1995 to secure their third ever crown.

The links do not end there though, as Eoin Curtin followed in the footsteps of his father Tommy in guiding the fortunes of the young footballers of St Flannan’s. Tommy was there in Ballyagran for the showdown with the Kerry men this year, and it was obvious that the love for football in the school does not fade easily with the former county manager. St Flannan’s were described as ‘we’ as father and son assessed where things went wrong as they made their way from the field.

It is no real surprise that the passion for St Flannan’s endures with Tommy, as he spent 36 years of his 40 year teaching career in Ennis. It began in 1979, and from the outset it was clear he was someone who would forge a trail as he became the first ever woodwork and technical drawing teacher in the school. He was lining out for the Clare senior footballers himself at the time so when the opportunity to set up base at home came around, he grabbed it with both hands.

In the famed hurling nursery, the big ball began to grow once more under his watch and after numerous successes across the age grades in the 1980’s, Tommy decided it was time to break another tradition.

“We won the Munster Senior B in 1988 and went to the All Ireland final in 1989 against Downpatrick from Down. We had a load of injuries for the final on that day and unfortunately just came up short. We decided after that to make the step up the ‘A’ competition because we had won all the titles at the ‘B’ grade so we wanted a shot at the big one. There is great credit due to St Flannan’s which was traditionally a hurling college that they allowed me to go up to the Senior A and I am very grateful for that. I always said that having won the B championship twice, the other schools would not really appreciate us looking for a third one so we might as well make the step up. We started to make an impression after the first few years and realised that we were as good as what was out there. We were matching the teams from Cork and Kerry who had great players at the time and were winning Munster and All-Ireland titles. We were happy and the lads were happy to take it on” he recalled.

The progress was steady and by 1993, St Flannan’s had reached the summit for just the second time in their history, adding a second title to their maiden one from 1959. It kick started a mini golden period with another final appearance coming 12 months later where defeat would be their lot. There is no denying Tommy’s regrets from that day still linger as he still vividly reflects on a late missed penalty along with 18 wides over the course of the contest.

The 1994-1995 campaign began in positive fashion with victory over two Cork sides in the form of St Colman’s and North Monastery to set up a last four showdown with Colaiste An Spioraid Naomh. The preparations for that game would prove memorable.

“We got a call from Fr Denis Fawl in St Patrick’s Academy in Dungannon Co Tyrone, who was the President there at the time. We were invited up there for the weekend and I think that is what really made us. We played challenge games against them and St Michael’s from Enniskillen and that experience really bonded us to make us the team that we were. The memory of the trip to Tyrone is something that everyone involved will never forget. The way they conducted themselves was brilliant and we were so proud of them. It was almost frightening at the time being stopped in Aughnacloy at the border. We had to get off the bus and walk up the hill with the army around pointing guns so that was scary. We would be playing matches in the evening and the helicopters would often fly very low across the field because the camp was just beyond the pitch in the school in Dungannon so that was intimidating. We were there for the football though and tried to focus on that. It was unheard of really to have those trips at the time. Overall, 1995 was a fantastic journey for us” said Tommy.

The relationship forged between the two schools endured over the years and Tommy recalled fond memories of the friendships made.

He said: “They had stayed in St Flannan’s on their way to play St Brendan’s and they were accommodated with us. We played them in a challenge game and they had their meal so we struck up a relationship with them through that. It was through the likes of Fr Des Hillery and Fr Brendan Moloney that the initial contact was made. From there, we travelled up every second year and they came down to us which was terrific at the time. We had a great bond with them and I was very close to some of the teachers involved with them for years afterwards. They would come to stay at my house if they were coming down to watch the Corn ui Mhuiri finals after qualifying themselves from Ulster. We would go through the tape of the game that night and we have some marvellous memories with them”.

The final itself proved to be a dramatic affair with St Brendan’s Killarney seemingly cruising as they surged clear with time running out. The resilience and belief instilled by the St Flannan’s management team shone through as Colm Mullen slotted a penalty before points from Mark Tobin and Johnny Daly saw the Alan Malone captained side come out on top with two points to spare. Tommy was singled out during the presentation of the trophy as having done great work with the winning side, but he was quick to ensure that fellow trainer Paul Geraghy’s efforts were also acknowledged.

It is often noted of those involved in sports that were seen to be ahead of their time, and there can be no question but that Tommy Curtin falls into that bracket. He even recruited a future All-Star hurler to provide the commentary for the video of their semi-final victory.

“We had the late Joe Fenwick with us at games to video them and after winning the semi-final in 1995 we watched the tape back on the bus home. It was a great experience for them to be able to watch themselves playing on the way home but it was just an example of how organised we were at the time. It was a great experience and I would say the lads still talk about it. We had a man who would go on to be very famous afterwards then doing commentary for us, a man by the name of Niall Gilligan. He was a great character and he did the commentary for us. It was no surprise to me that he went into auctioneering after seeing him in action that day” he laughed.