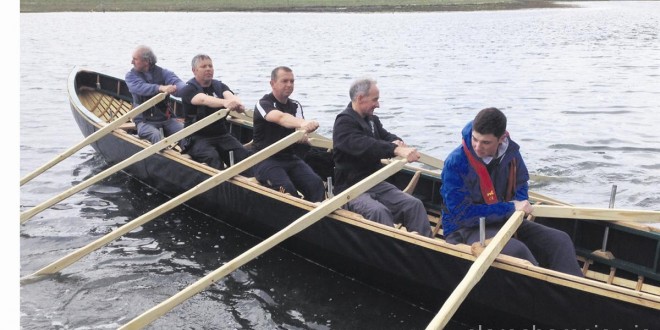 QUERRIN Pier was buzzing last Sunday for the launch of a five-hand currach, built by boat-builder, James Madigan. A vessel of this type has not sailed the estuary waters since the 1800s.
The launch was in conjunction with the Querrin regatta, which was held last year, for the first time since 1907.
Dixie Collins, of the West Clare Currach Club, said that elements of the five-hand currach were unique to West Clare.
“She’s just under 30 foot and she’s a five-hand canoe, with a mast up on the bow with a lug sail. That’s a square sail that you use in boats like this. They wouldn’t have been traditionally used in Clare but they would have been used on the Aran Islands and down in Kerry.
“She’s a bit wider on the beam and the oars are a bit longer than our three-hand canoe. We’re all quite curious to know how she’ll handle and how she’ll feel. We have people here today from Kerry, Cork, the Aran Islands and Connemara,” he explained.
Members of the McSweeney family in Kilkee fundraised in New York for materials, in memory of Eddie McSweeney, and Clare VEC funded tutor hours to build the boat.
James Madigan, from Kilrush, built the currach with a keen group of local trainees, during the winter in Ned’s Shed.
“We started around November. It was an educational project. We started on Saturdays from 10am until about 3pm. We went back into it again after Christmas.
“The boats are only a by-product. It’s really to keep the skills alive. I think it’s been about 150 years since the likes of that was seen around here. That particular style is unique to Clare. It has got features that you wouldn’t see in Kerry or Connemara,” James, who learned his trade from his grandfather, explained.
“Going back over a long number of years, a style developed locally, depending on local conditions, which makes it more interesting,” Dixie noted.
“I think the Clare boats were more refined. That goes back to Victorian times. Kilkee was a Victorian town and, to make extra income, the fishermen would take visitors out for trips,” James revealed, before Dixie outlined what the boats were sometimes used for.
“There are well-known caves, Pigeon Cave, back under the cliffs near Bishop’s Island. The cave is about 150 to 200 feet deep. They would take people into the caves. We reckon this boat will last 50 years, if it’s managed right. This boat will outlive all of the people that built it,” he maintained.
James has built 30 boats, including one in the US last year.
“It’s a tremendous asset to the community. You have a low-budget vessel that you can use for sailing. There is a massive expanse of water around the estuary. It would be great to see the boat used to teach seamanship,” James suggested.
“You could go round Ireland in that boat. It’s like anything, you need to know the day not to go out on the water. It just opens up a whole new place to go.
“If you’re out on the water, you see the coast in a very different way than you do when you’re looking out at it. We build all of these boats in memory of the people who used them.
“I’m old enough to have known the lads who fished but the young lads wouldn’t remember them. It’s a real living link for us,” Dixie said of the new five-hand currach.