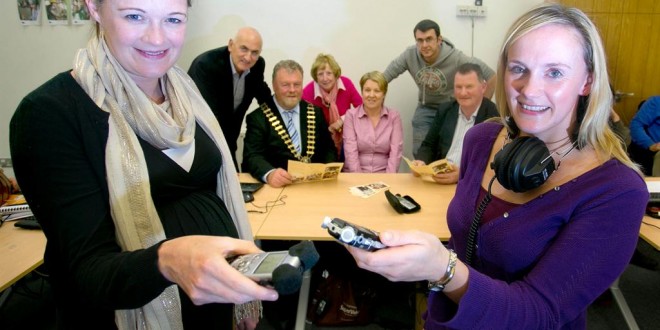 The work of the award winning Cuimhneamh an Chláir, the Clare Oral History and Folklore group was praised as the Mayor of Clare, Councillor Joe Arkins launched the ‘Winter of the Cuaird’, Cuimhneamh’s winter collection programme for 2013/14.

The group of volunteers, who have already conducted over 580 interviews with some of Clare’s oldest citizens, are hoping to add to their increasing archive of memories during the winter months, the traditional time for social visiting in the past.

Speaking at the launch Councillor Arkins commended the volunteer Cuairteoirí for their hard work on behalf of the people of Clare and encouraged the group to continue and develop both their collection and dissemination work.

“It is just so vital to record and preserve the social history and oral heritage of our county. I’ve been to many funerals over the years where those gathered have regretted the fact that nobody recorded the memories of those now gone from us. Cuimhneamh an Chláir have made huge efforts to develop a systematic and co-ordinated approach to collection across Clare and have ensured that vital knowledge about our past has been recorded, where otherwise it would be lost.  To have an archive of almost six hundred interviews across Clare is wonderful for our county and I know that over the winter that will be significantly added to.”

He also encouraged the group to continue with their efforts to develop goals towards further access to the archive in the future. “There is no point having a treasure if it’s buried.  I know that Cuimhneamh have already made huge efforts to get the material back out to the public through public events, lectures, radio programmes and their website and I hope that over the next few years, support can be garnered to develop that effort towards a permanent venue for interaction with the archive.”

Oral historian and founding member of the Oral History Network of Ireland Regina Fitzpatrick also addressed the event and spoke about the impact Cuimhneamh an Chláir have had on a national and international level.

“Cuimhneamh an Chláir is one of the best oral heritage collection groups in the country. There is no systematic, co-ordinated group like it in Ireland.  I know from my own work in oral heritage across Ireland that in many counties, Cuimhneamh is now being looked on as a model as to how oral heritage should be collected and utilised.  The group have made a huge contribution to oral heritage in Ireland and I hope that they receive the support they deserve to develop into the future.”

While Cuimhneamh’s collection programme continues all year round, the voluntary nature of the group means that for many of its over forty volunteer collectors, the winter offers the optimal time for collecting memory and folklore.

Tomás Mac Conmara, the group’s co-ordinator explains that this actually is helpful to the group as the old tradition of ‘Cuaird’ or social visiting, was invariably a winter practice in the past.

“When we established the group, it was for primarily cultural reasons.  As individuals, we are dedicated to the preservation of our culture and identity. It made sense therefore, for us as a collection group, to evoke that tradition as part of our work.  All over Clare in the past, local people, usually men, put on their caps, took up their walking sticks and went on the ancient practice of cuaird.  They’d sit around the open fire in some neighbours house and talk and listen in turn.  In that way, our heritage and lore was passed from generation to generation for centuries.”