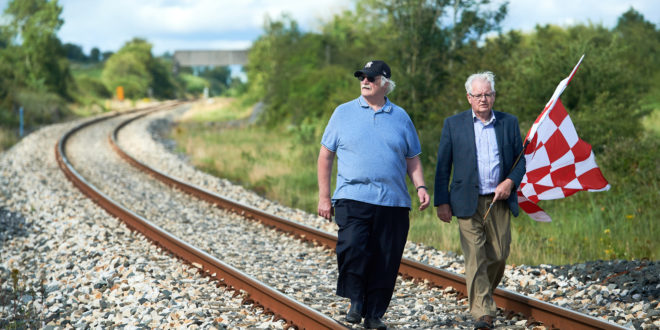 Crusheen's Michael O Doherty and Sean Keehan who are calling for a railway stop in Crusheen. Photograph by John Kelly

THE prospect of trains grinding to halt for passengers at Crusheen have taken a turn for the better with the appointment of Green Party leader Eamon Ryan to the transport portfolio.

The new Minister for Transport, Tourism and Sport is also Minister for Climate Action and Communications Networks and his dual role has given people living in the Crusheen area hope that the Limerick to Athenry/Galway train will once again stop in the village.

Such a development would be of benefit to those who have to commute to Galway or Ennis and Limerick for work, business or study. Journey times would be slashed, as well as reducing the stress associated with road travel.

Michael O’Doherty, spokesman for the Crusheen Rail Stop campaign group, said directing people from cars onto trains would not only help them achieve huge savings in the long run, but would also reduce our greenhouse gas emissions and carbon footprint.

Back in 2010, the then Minister for Defence and Clare TD Tony Killeen announced that approximately €1.5 million had been allocated for the provision of a rail stop at Crusheen, on the route of the recently opened Western Rail Corridor.

Mr Killeen said, “Iarnród Éireann’s chief executive Dick Fearn informed me that the company is very pleased with the level of passengers now utilising the recently opened section of railway between Limerick and Galway. He also said he believes the provision of a rail stop at Crusheen will contribute to the success of the overall service.”

However, proposals for a stop at Crusheen were dealt a blow four years ago when the government said it was focussing capital investment in the rail network on existing lines, in a bid to ensure their safety and efficiency.

Mr O’Doherty believes they can fare better in dealing with a Green Party Minister for Transport.

Minister Ryan and the department are responsible for implementing an integrated transport policy. According to his mission statement, “The integrated policy will be designed as far as possible to overcome existing delays, bottlenecks and congestion and to provide the consumer with greater choice by offering alternative modes of transport. Through the integrated approach the department will develop and implement policies designed to improve regional balance and reduce rural isolation and social exclusion.”

Taking this into account, Mr O’Doherty said, “We will certainly be putting pressure on Eamon Ryan to reopen the station, and hope there will be a positive response. Green Party Senator Róisín Garvey got a good vote in the general election from the area and is behind us.”

“There has been a lot of development in Crusheen in recent years and it’s growing. A new housing estate is being built and planning permission is being sought for another. We are becoming a town. We have great access to the motorway for Limerick, Galway and Dublin but a lot of people don’t have cars, so a rail service would be well supported, Mr O’Doherty said.

He said there is evidence from Iarnród Éireann’s own figures to support the need to reopen the station to serve the wider Crusheen/Tubber/Tulla area, which has a population approaching 4,000.

“Passenger numbers on the Western Rail Corridor route from Galway to Limerick rose to more than half a million in 2019.

“Figures released by Iarnród Éireann show that 531,000 passengers travelled on the corridor in 2019, with an overall growth of 16% on all sections of the route, including Ennis-Athenry.”

Mr O’Doherty said Galway-Limerick continues to be the fastest growing route in the country with Oranmore station, which was built as part of Phase 1 of the Western Rail Corridor, experiencing growth of 40% to/from Oranmore as commuters continue to avail of the rail alternative.

“Based on the huge increase in passenger numbers, West on Track has called on the National Transport Authority to make the LEAP card available to rail commuter passengers in Galway without further delay,” he said.

Mr O’Doherty said the link to Galway city would be hugely beneficial to the student population of North Clare attending NUI Galway because of its close proximity to the station, just off Eyre Square.

“Commuting by train to college instead of staying in student accommodation would minimise the cost to families and that would be very welcome, he said.

Mr O’Doherty noted the Crusheen station reopening was discussed at a meeting of the Western Intercounty Railway Committee in Claremorris, which was attended by three Clare councillors. He also said that he, along with Seam Keehan attend West on Track meetings to back the wider campaign for the reopening of stations and retention of lines across the country.

“The reopening of Crusheen station was included in Transport 21 but for some mystical reason it has been left out. Near the old stationhouse, which is now in private ownership, land and planning permission for all the necessary work for a new station is there; Iarnród Éireann owns the land. A modern signalling system and other technical equipment would be the main costs, in addition to a new platform and shelter, a car park and a ticketing system,” he said.

The rail stop campaigner said the reopening of Crusheen station is “part of the unfinished business” for the entire West of Ireland. “It’s part of the bigger picture to support the West and Minister Ryan should remember this. We are looking for cross-party support for our campaign.

“We will be relentless in our efforts to have the station reopened and trains stopping here again,” he stated.

Mr O’Doherty outlined that the rail stop campaign group also supports other issues that affect their area or the West in general.

“We’ve backed the lobbying for a bus shelter, but the council will be doing that soon.  The problems at Shannon Airport are also very much our concern; it’s important for the West of Ireland and there are people from this area working there,” he said.