Home » News » Crusading for a relay good cause 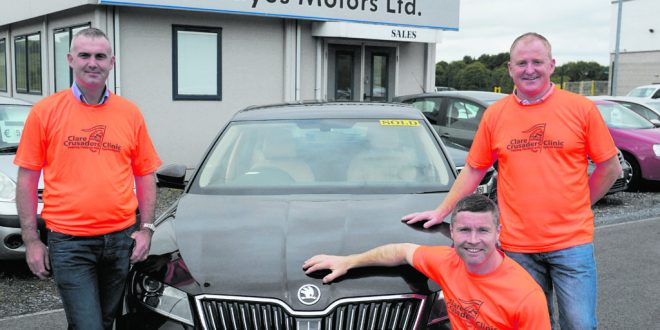 Crusading for a relay good cause

People are being urged to dig deep and support the inaugural Clare Relay event, which involves 70 charity runners travelling 140 kilometres across the county this Saturday.

As part of its efforts to raise more than €240,000 this year, the Clare Crusaders Children’s Clinic is organising a sponsored relay from Loop Head to Killaloe. The relay will involve teams completing the 140km route in groups of between six and 10, each running 10km.

Starting from Loop Head at 6.30am, it will finish in Killaloe at 8.30pm. Along the way, people will have the opportunity to make a donation to the bucket collectors.

The time allocated to each leg is about one hour and teams can complete more than one leg during the day and one member of the team has to carry a phone.

The relay will not be stopping at each point, so people have to be ready to go when the relay arrives. A support car, including a first aider, will be on the road at all times.

The event is being supported by Keith Whyte, winner of the 2015 100km ultra marathon in Antarctica.

“The Clare Relay is another fantastic fundraising event organised by the Clare Crusaders running group and promises to be a great day out for all involved,” Keith noted.

The running group is headed by Barry McMahon, Padraig O’Sullivan (Barefield) and Kieran McCarthy (Shannon), who has completed several long distances events for charity. With up to 150 in total involved in the group, between 25 and 30 meet every Saturday for their weekly run.

Barry McMahon said the running group was inspired by a group of runners from Roscommon who covered 32 counties in 32 hours earlier this year.

A Lissycasey native who is now living in Crusheen, Barry said he hopes the relay will become an annual event.

On Sunday, a family fun day will be held in the Crusaders’ Clinic at Barefield between 1pm and 4pm.