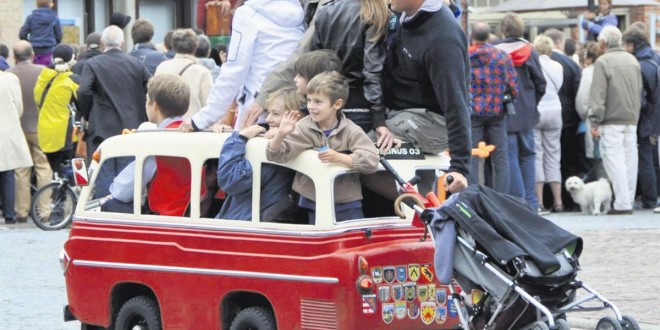 This year’s Ennis Street Festival line-up is branching out in new directions, as it introduces Ennis Sounds Good, a parallel music festival, and offers the public a modern take on dancing at the crossroads.

The festival takes place from July 4 to 6 and this year’s latest addition, Ennis Sounds Good, will mean the fun and spectacle of Ennis Street Festival continues. With 36 gigs across 15 venues, it is sure to be a success.

That evening it will be followed by a dancing at the crossroads in the Sky event at Abbey Street Car Park at 7pm, as part of a co-production with Fidget Feet and Aerial Cirque.

Festival director, Ana Bella Alvaraz, said, “The Ennis Street Festival is a celebration of the life of the people from Ennis and County Clare in the streets of Ennis. Ennis is a beautiful town with a very rich heritage and fantastic people, full of ideas and energy. This festival is a fantastic platform for everybody to showcase their own artistic ways.”

Set to draw the crowds is the festival’s main act, Casus Circus from Australia, who will perform their international production, Knee Deep, on July 5 in Glór. Casus Circus is a group of four performers, who are at the top of their game. This local performance follows their 2013 appearance at the Galway Arts Festival and a sold-out seven-night tour.

“These performers are athletic, artistic, poetic with their abundance of creative energy. They present an exhibition of skill, control, poise, passion and power, in a performance that will leave you breathless,” said Ms Alvaraz.

Ennis Street Festival wouldn’t be what it is without a bit of the unusual and fitting the bill for this year’s festival is Delinus 03. Hailing from Amsterdam, this is the tiniest taxi-bus you will ever see in Ireland. Complete with a friendly bus-driver and charming guide, they will bring visitors on an adventure around the streets of Ennis.

Another item sure to impress is Cirque de Sally, presented by Ouch Entertainment. Fading circus star, Sally puts down her knitting needles and steps into her final performance of a lifetime.

The festival puppet show is entitled Red Riding Hood and the Builders and will be performed by Smithereens Puppet Company in Glór on Friday, July 4. This unique performance sees the classic fairytale re-told in an interview with the wolf, who is not shy about pointing out the inaccuracies and giving the true version of events, according to him.

Further children stories are also told in a new light in Tic Toc Puppets’ reproduction of The Enormous Crocodile by Roal Dahl. This performance is in collaboration with Joe Varden, narrator and Emer O’Flaherty, musician. The Ennis-based puppet and street theatre company are known for their giant puppets and life-size acrobatic puppet, Peadar, but this year’s production is completely different.

Ana Colomer, Tic Toc Puppets’ founder, said, “We are broadening, working in more than just puppetry. I would define this show as visual storytelling. Using black light and live drawing, the scenes of the story appear and change as the narration goes on.”

It will be staged in Glór on Saturday, July 5.

Meanwhile, on Sunday, July 6 at 1pm, the River Fergus will play host to the annual Ennis Street Festival Duck Race, with this year’s prize a one-night stay at The Inn at Dromoland, with dinner at Shananigan’s Gastro Pub. Anyone can sponsor a duck for the race – contact info@ennisstreetfestival.com for details.

There will be plenty to involve the children and one event that will bring the whole family together is the kids’ disco with Will Softly and Gigy.

Other events of note include comedy with A Bit on the Side by Conal Gallen; The Festival Tent with Ennis Gospel Choir; music by the Ennis Music Project (CYS); Switch; a number of art exhibitions around the town; children’s and adults’ workshops at Glór; 3D street illusion artwork; Art for All; Jaskane Café Trio; Earthship; Dhá Lámh Theatre will presents three plays, The American Dream, The Sandbox and The Zoo Story by Edward Albee Season; dance event with the community groups; flags display on O’Connell Street by Rice College and free dance workshops.

Ms Alvarez explained that the arts festival is designed to maximise the enjoyment of everyone in the town, with many exciting, family-friendly events being staged across the weekend.

“In the last nine years, the Ennis Street Festival has been providing the local community with a positive cultural, social and economic input. It is a great way to showcase all the Clare talent and the levels of participation,” she said.

She added that the festival is very lucky to have the continued support of Ennis Town Council, Clare County Council, Arts Council and Failte Ireland. Also, this year, IPB insurance made funding available to the festival with the launch of the IPB Youth and Community Fund, which she said has allowed the festival to develop and produce more artistic projects and activities for the whole.

Supporting the arts in Clare