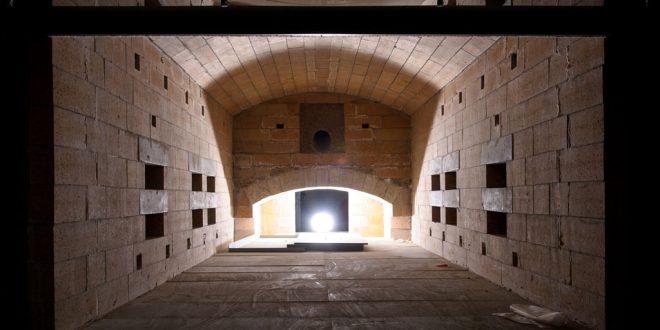 An interior view of the cremation. Photograph by John Kelly.

Crematorium just weeks away from opening

These are the first pictures from inside Clare’s first crematorium, which will open in Shannon in the coming weeks.

While work is still continuing at the site in Illaunmanagh, it is quite close to completion now and the furnace that will burn the bodies has been fitted.

Cremation, very much frowned upon by the Church in previous generations, is now accepted and has been growing in popularity in this country.

Now one in six deaths are followed by cremation, compared to less than one in eight 10 years ago, despite the Republic still only having a handful of crematoriums.

It is likely that more local people will now opt for cremation, when it becomes available locally, while the Shannon facility is likely to have customers from several neighbouring counties.

The new crematorium has a main room, which can accommodate 140 people, prior to the incineration of the body. Here, people can speak about the deceased and it will be possible to display pictures of them on screen. This room also has a webcam so people can tune in from other places.

Another secondary room off the main room can accommodate an overflow of 65 to 70 people, who can watch proceedings from there.

Coffins will be burned in the furnace, along with the bodies, as the timber structure is needed for burning. At its peak temperatures, the incinerator will be approximately 1,000 degrees. Ashes will come out of it at a temperature of around 600 degrees. They then go into a cooling unit and and, when below 60 degrees, into another container. Finally, when the temperature is below 25 degrees, they can go into an urn.

The crematorium has a very sophisticated filtration system, which cost around €460,000 to purchase and fit, and there will be very few emissions.

At the moment, a memorial wall is being built on the site. When completed, it will contain 420 slots, measuring five inches by nine inches, where people’s ashes can be left.

There will also be another 42 larger slots, which can accommodate the ashes of two people.

The crematorium has been built next to Illaunmanagh graveyard and full testing is set to begin later this month. An open day for the public is set to take place on May 28, with cremations likely to be held in June.