Home » Sports » Cratloe through to u-21 B final 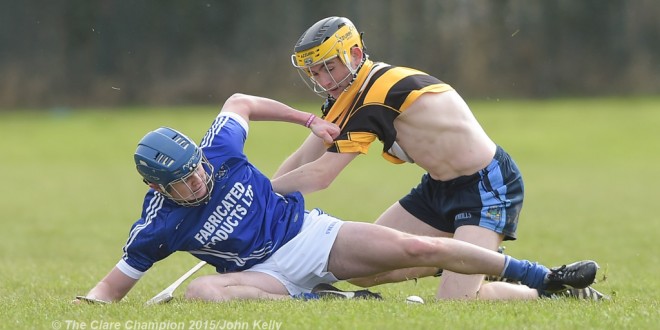 Conor Crosby of Cratloe tugs on John Fawl of Crusheen-Tubber during their U-21 semi final at Clarecastle. Photograph by John Kelly.

Cratloe through to u-21 B final

Cratloe caused a surprise when they overcame a fancied Crusheen-Tubber at Clarecastle on Saturday afternoon to qualify for the final of the under 21 B hurling championship where they will play either Clonlara or Tulla whose semi-final was postponed due to a bereavement in Clonlara.

In windy and cold conditions, two goals inside four minutes at the start of the second half proved decisive on a day when All-Ireland under 21 medallist, Shane Gleeson played a key role in his side’s victory, hitting all but a goal of their tally.

Playing against what was mainly a cross field wind, Cratloe took a two point lead in as many minutes thanks to Shane Gleeson. Crusheen-Tubber slowly got a grip on the tie and pointed frees by Lorcan O’Grady and Colin Vaughan tied up the game after seven minutes before Robbie Malone fired the combination side into the lead.

At half time Crusheen-Tubber were 0-6 to 0-3 in front but they were rocked in the opening minute of the second half when Jack McInerney goaled for the winners following a Shane Gleeson delivery. Three minutes later Gleeson broke through for his side’s second goal.

Early in the final quarter Colin Vaughan pointed a free for Crusheen-Tubber and the cut the deficit to the minimum when Donal McMahon pointed with eight minutes remaining.

In the closing minutes Crusheen-Tubber piled on the pressure but the winner’s defence held firm saving a penalty and a number of attempts on goal. In the fourth minute of ‘injury time’ a Shane O’Leary clearance found Gleeson and he fired over the final score of the game