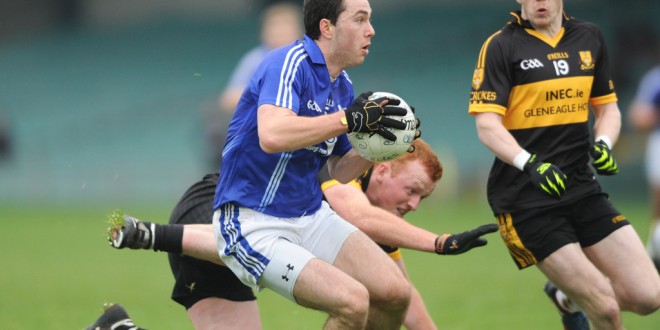 Conor McGrath will be hoping to deliver the scores for Cratloe on Sunday. Photograph by John Kelly

COME 2.30pm this Sunday afternoon, by the mouth of the River Colligan in Dungarvan, Cratloe will take on The Nire for a place in Sunday fortnight’s Munster club football final.

This weekend’s semi-final will represent this group of players’ 14th championship game of 2014. In their 780 minutes of championship hurling and football to date this year, Cratloe have yet to wave the white flag. The only white flag waving has been left to the men in white coats beside the posts.

Plenty of people have held the view that winning a hurling/football double in the county was an impossible feat. Now, Cratloe are just 180 minutes from completing a Munster double, which would top their historic county double-winning achievement.

Of course, thinking ahead isn’t something this Cratloe panel will be indulging in. They haven’t up to this point and that’s one of the reasons why they are where they are.

Another reason is simply because they haven’t been held back by accepting the traditional view that being a dual club leads to trouble, if both codes are treated on an equal footing. Player-power and not stale opinion holds sway in Cratloe. Not player-power in the negative sense of trying to influence team selection but in the sense of believing that anything is possible, as long as they perform on match day. To do that, players must live the life of elite athletes day and night. Cratloe are obviously doing just that. Otherwise, they wouldn’t be an hour away from reaching the Munster club football final, having already made it to the hurling decider.

Keeping it simple and, more importantly, producing on game day has delivered thus far in 2014 for Cratloe. They clearly have the players capable of doing it but to make the transition from having the capability to actually doing it Sunday-after-Sunday is a remarkable feat.

The Nire, who are based in Ballymacarbry, will feel that this is a huge opportunity for them to make it to a provincial final. Playing Cratloe in Dungarvan presents a definite advantage in a field that is tight by inter-county standards. Having comprehensively beaten Ballylanders in Kilmallock in the quarter-final, The Nire will be confident they can deliver against the Clare champions.

Club games between Clare and Waterford teams tend often to swing towards whichever club is playing at home.

More importantly, The Nire have a collection of some excellent footballers, including goalkeeper Tom Wall; Maurice, Thomas and Michael O’Gorman; Brian Wall, Liam Lawlor, Jamie Barron and Shane Walsh. In Waterford minor Conor Gleeson, they have a man who inflicted damage on the Clare minor footballers this year, while he put away 1-2 against Ballylanders two weeks ago.

The Nire will present a formidable challenge but one which Cratloe are well capable of withstanding. In Liam Markham, Conor McGrath, the Collins brothers and Cathal McInerney, they have players who are performing at the top of their game.

If Cratloe don’t win this weekend, it won’t be because those players were not tuned in; it will be down to The Nire being the better team.
Cratloe have been hit by the absence of Cillian Duggan, with a jaw injury. However, John Galvin is not a bad replacement to start in the middle.

Come 4pm on Sunday, Cratloe are likely to have played their most testing championship football game of 2014. If they are still standing, they will be two hours removed from completing a Munster double last achieved by St Finbarr’s in 1980.

Count on the indefatigable men of Cratloe to keep the blue and white flag flying.