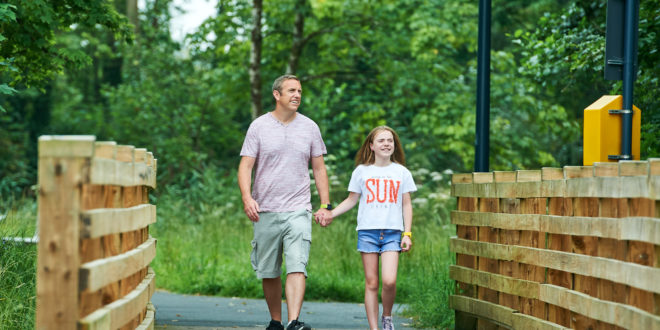 Shannon's Kieran Mc Carthy and his twelve year old daughter Aoibheann, who has Cystic Fibrosis, are appealing to people to keep their guard up in relation to Covid-19 spread prevention measures. Photograph by John Kelly

Covid doesn’t take a holiday when the sun comes out

AN EMOTIONAL appeal has been issued by the father of a young Shannon girl with Cystic Fibrosis, as the county’s rate of Covid-19 spiked sharply this week.

Kieran McCarthy, dad of 12-year-old Aoibheann, and a member of Cystic Fibrosis Ireland (CFI) is urging people not to become complacent about their safety and that of others, especially the most vulnerable. He said that in recent days, he has seen “crazy things,” that are very upsetting to his family and to others at risk. He told The Champion he believes the change in government has led to confusion over the safety message, and called for more to be done to convince younger people of the need to protect their families and the wider community.

“Some people don’t understand because they have never had to experience illness or loss,” he said. “Some people are oblivious. Nine out of ten teens don’t understand hardship and loss. What they don’t realise is that it will come to everyone. I see gangs of young people together all the time. I think, ‘Well, that was me 20 years ago’. On the other hand, I want to tell them to go home and get masks.”

CF is a condition that primary affects the lungs and so any respiratory infection poses a high risk of serious complications. The pandemic has been a source of anxiety for sufferers and families for months. “We were watching this from Day 1,” he said. “Once the restrictions came into place, some people were complaining and I said to myself, ‘Welcome to life with CF’. We have to be constantly vigilant, watch our hygiene and use self-isolation.”

During the lockdown, we had a routine. We were about to go for a walk or a drive to a beach. Now, the beaches are mobbed. People are taking a holiday, which they are fully deserving of. The thing about it is that Covid-19 doesn’t take a holiday when the sun comes out, we can’t become complacent. Since the day Aoibheann was diagnosed, our family has lived by the motto that CF doesn’t take a day off, so we don’t either.”

In Kieran’s view, the change of government has created a major challenge in encouraging people to keep up efforts to curb the spread of infection. “I honestly feel a mistake was made in changing the health minister,” he said. “Sadly, we lost Tony Holohan as Chief Medical Officer, for personal reasons. He and Simon Harris had been front and centre and there was a sense of trust. Switching minister has been like changing a team’s manager mid-season. A lot of people still don’t know who [Minister] Stephen Donnelly is. They’re not sitting at home glued to the TV. The ship needed to be kept steady so I don’t understand the change of minister because the message has been lost a bit.”

When it comes to changing younger peoples’ behaviour, Kieran said the government needs to focus on working with influencers to get the message across. “We need to get more community leaders on board,” he said. “Young people are driven so much by social media, it’s the only way to reach them. What about getting someone like [actor] Paul Mescal involved? We have to make things like wearing masks cool, get some kind of a social media challenge going to encourage that.”

The ongoing rise in the number of Covid-19 cases, particularly ahead of the re-opening of schools, is a source of concern for the McCarthy family. Aoibheann will be going into sixth class at St John’s NS in Cratloe. “We have a lot of faith in them,’ Kieran said. “We are really hoping she will be going back. During the lockdown, she didn’t have anyone to play with other than her brother Oisín (7) and they are both looking forward to going back to school.”

With news that funding for key health projects like the National Children’s Hospital is now being diverted for Covid-19 relief, there is concern for the future of long-awaited facilities.

“CFI and another charity have raised €1 million towards a new unit for 20 CF in-patients in Beaumont Hospital in Dublin,” Kieran outlined. “It was in the Programme for Government back in 2016, but we don’t know where it is now. We’re in limbo on it and it’s a worry.”

Kieran also encouraged those with CF and their families to apply for grants towards the cost of Personal Protective Equipment (PPE), which can be done on cfireland.ie, before the deadline of August 22.

Fiona McGarry joined The Clare Champion as a reporter after a four-year stint as producer of Morning Focus on Clare FM. Prior to that she worked for various radio, print and online titles, including Newstalk, Maximum Media and The Tuam Herald. Fiona’s media career began in her native Mayo when she joined Midwest Radio. She is the maker of a number of radio documentaries, funded by the Broadcasting Authority of Ireland (BAI). She has also availed of the Simon Cumbers Media Fund to report on development issues supported by Irish Aid in Haiti. She won a Justice Media Award for a short radio series on the work of Bedford Row Project, which supports prisoners and families in the Mid-West. Fiona also teaches on the Journalism programmes at NUI Galway. If you have a story and would like to get in touch with Fiona you can email her at fmcgarry@clarechampion.ie or telephone 065 6864146.
Previous Susan Crawford to be co-opted to Council
Next Sunday update: 66 newly confirmed Covid cases nationwide