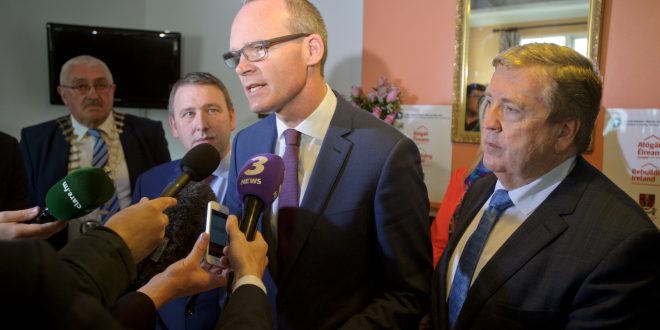 The Minister will later address members of Clare’s Fine Gael party at their Annual General Meeting this evening, where he will hope to secure some undecided votes in the leadership contest.

As yet undeclared, Deputies Pat Breen and Joe Carey would not be drawn on their stance in favour of one candidate over the other at today’s events, and Minister Coveney said he would not ask them to publicly declare during the media questions and answers session.

The first of Minister Coveney’s engagements was to visit Laurel Lodge, Clare’s only homeless hostel located on the Clare Road in Ennis. While there he met with some of the residents and discussed his leadership bid with journalists.

He then went to Pairc na Coille bungalows to meet with the residents of 27 senior citizen accommodation units. These units were acquired under a lease arrangement by Clare County Council more than a year ago. During that visit he shared a bite to eat with residents, and took time to speak and take pictures with a number of them.

His final official engagement was to visit the Aisling housing estate at Shanaway Road, Ennis, where 23 units have been constructed in what was formerly an unfinished estate. The units are expected to be completed by July 2017 and a further 11 units are to be completed by September 2017.

Here Minister Coveney met with Clare County Council officials and building contractors behind the development, and was given a tour of two of the finished properties.

Carol Byrne is a reporter at The Clare Champion newspaper reporting on news in the East Clare area and the arts. She also covers the courts in County Clare and has received seven national awards for this coverage from the Law Society of Ireland and a National Lottery Local Ireland national media award for Best Community Story 2019. A Masters in Journalism graduate of NUI Galway, she also holds a Bachelor of Arts from the University of Limerick in Music and Media Studies, and a Higher Diploma in Irish Legal Studies. She began her career interning at The Limerick Leader and Clare FM, before taking up a full time post at The Clare Champion in 2006.
@@Carlsburn
Previous Revenue seize cannabis at Shannon Airport
Next Ennis in pursuit of Texas twin