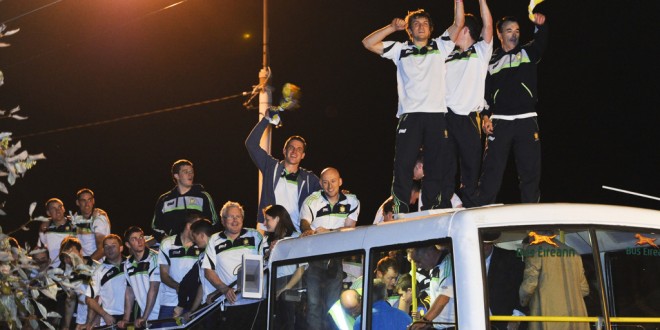 The bus with the players arrives at the Fairgreen for the Clare U-21 and Senior All-Ireland Champion hurlers homecoming in Ennis. Photograph by John Kelly

THIS county has produced a platoon of fabled men and women. Cup an open ear towards the distant mists of time and hear the deeds of Brian Boru, Máire Rua, Biddy Earley and Captain Edward Kennedy resonate.

If you were to happen upon a game of hurling, at a time of your choosing during the 20th century, the feats and skills of Pa ‘Fowler’ McInerney, Tommy Daly, Jimmy Smyth, Ger Loughnane, Brian Lohan, Seán McMahon and Jamesie O’Connor would leave you certain this was a county not short of sporting legends. A county not scraping around, searching forlornly for men worthy of having the saffron and blue placed on their backs, as reputedly Brian Boru had at the Battle of Clontarf in 1014.

At close to 6.30pm on the evening of Saturday, September 28, 2013, a wondrously skilled group of young men nailed their place in the sporting and broader historic annals of their county.

Long after what remains of this epic year has elapsed, memories of their heroism, ambition, temperament and glorious skill-set will live on. These young men have changed how hurling perceives itself and how non-hurling people perceive the ancient game.

Of course it would be remiss, bordering on petty, not to acknowledge that they have been guided by a man who believed in them utterly. Davy Fitzgerald has and will give his last drop for the county. Allowing those wonderfully gifted players to flourish and play with a freedom evident in the draw and replay borders on a work of art. All year we have written and spoken about the Clare system perhaps diluting the innate, free-flowing ability of this team.

Not much of an argument now is it, given that Clare has participated in and won perhaps the most compelling All-Ireland final in the history of hurling.

Such was the courage and beauty of Clare’s play on Saturday evening, it was a privilege to say that you shared a county with these driven artists, who repelled Cork every time they looked like reeling in the new All-Ireland champions.

Much of last week was taken up with speculating if Shane O’Donnell or Cathal McInerney might be handed a start in the full-forward line. In placing trust in O’Donnell to deliver, the Clare management displayed a thrilling disregard for convention. It’s not that anybody in Clare didn’t think that the Éire Óg teenager wouldn’t deliver, it’s just that the GAA world loves to refer to ‘experience’.

It’s a word that has blighted the career of many a young man. Club and county mentors are often tempted beyond reason to go with the safe option, the man who has years of experience behind him. Thankfully, and to their credit, the Clare management have never opted for that approach. If they felt a player was good enough, he was in. They weren’t scanning birth certificates to bolster their decision making.

O’Donnell delivered the most lethal 35 minutes of championship innings in the history of Clare hurling. Life changed for him between 5pm and 5.35pm on Saturday. The hurling landscape was also irrevocably altered.

Has Croke Park ever witnessed a game of this speed, skill or almost insane excitement? For that, the players, management and anybody who has given time to their clubs or development squads must be acknowledged. They can justifiably feel part of this revolution.

It would be remiss not to point to the courage and tenacity of Cork. Another county would have left down their hurleys long before last Saturday evening.

Faced down by a hugely motivated collection of uber-skilled stickmen, Cork only wilted when Clare buried them for what must have been the 10th time in 140 minutes of classic hurling. Cork’s manliness brought the best from Clare, who had to dig deep repeatedly.

Stretching from the tip of Limerick City, north towards Black Head, south via the Shannon Estuary and west to Loop Head this county heaved in awed excitement last weekend.
The county is home to newly minted legends. Young men who delivered in the most pressurised environment their sport can offer.

Their deeds are already deeply wedged into the psyche of a near-disbelieving county. Memories of 2013 will live and prosper the deeper we delve into this century.