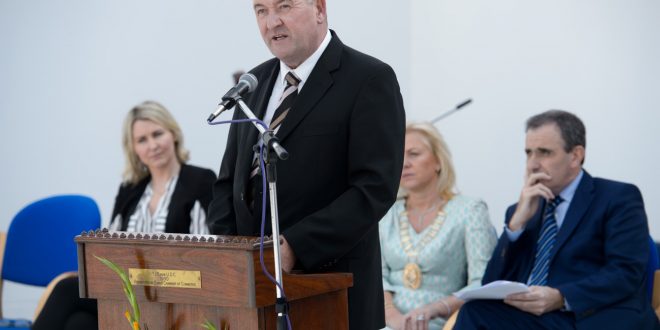 BUSINESSES in Ennis and Kilrush will be hit by a hike in the commercial rate for the third consecutive year, after a majority of Clare county councillors supported the council’s controversial policy of rates harmonisation.

Despite opposition from Ennis councillors and Kilrush Councillor Ian Lynch, rates harmonisation was supported by 17 votes to eight.

Councillors also voted to approve the 2018 Budget Estimates by 17 votes to eight, after a two and a half hour meeting. Councillor Pat Hayes proposed the adoption of the estimates and this was seconded by Councillor Joe Cooney.

According to the council, the latest increase amounts to 2.66% in Ennis in the annual rateable value and 3.94% in Kilrush.

Chief executive officer Pat Dowling outlined that the Local Government Reform Act 2014 set out a process whereby the differences in rates multipliers between the former towns and the former county area have to be eliminated over time.

This process commenced in 2016. At the same time in 2016, he recalled the council introduced a rates payment incentive scheme in respect of occupied properties.

The purpose of this scheme was to encourage the timely payment of rates and also to mitigate the impact of harmonisation adjustments for those who pay all rates due within certain time-frames.

Mr Dowling pointed out that to consider the impact of the rates harmonisation adjustments for 2018 and the changes to the payment incentive scheme, it is important to understand that most of the properties in Ennis and Kilrush have bills of less than €5,000.
In Ennis, the percentage of business with bills of less than €5,000 in 2017 is 80%, while in Kilrush it is 87%.

The payment incentive grant will also be increased by an extra 2% in Ennis and an extra 3% in Kilrush.

Finance officer Niall Barrett pointed out that for many years, the commercial rate in the county was higher than in the urban areas of Ennis and Kilrush, which are now effectively “catching up” with the level in the county.

Mr Barrett told councillors if businesses paid their rates on time, the latest changes would see an increase of .5%.

Councillor Johnny Flynn said the council could have decided to bring the county rate down to the level of the urban area, using the considerable savings netted following the abolition of town councils.

He was supported by Councillor Pat Daly, who also pointed out that rates in Ennis should have been decreased under harmonisation.

However, Councillor Gerry Flynn said he supported rates harmonisation and recalled a former council chief executive officer had pointed out that businesses in other parts of the county were subventing firms in Ennis and Kilrush.