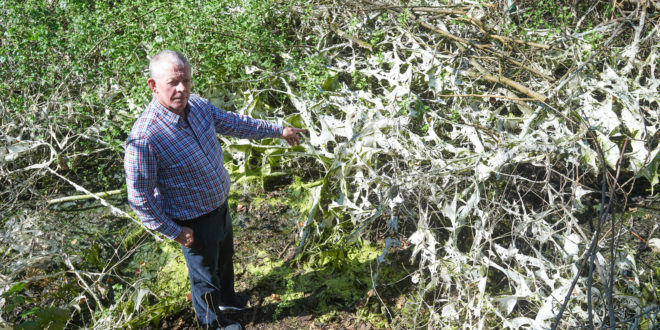 Resident Jack Byrnes points to some of the area affected by white scum near his home in O Briensbridge. Photograph by John Kelly

TESTS undertaken by Clare County Council laboratory technicians have revealed that an unusual
white scum on large tracts of the banks of the River Shannon is “non-toxic”.

Former O’Briensbridge Community Group chairman, Jack Byrnes requested Clare County Council, Waterways Ireland and EPA to investigate the origin of a massive spider’s web of white scum, which is left on vast tracts of land from the Pattern Weir all the way to Castleconnell after the last flooding.

Mr Byrnes said the worst example of this scum was underneath his house, which was deposited all over the river bank about five feet above the normal water level.

“It is like someone got a paint brush and painted all the river bank down along from Parteen Weir to Castleconnell for more than four kilometres. It is like a whitewash but you can’t get it off the stones.

“I have contacted farmers who have animals as I am concerned it could be toxic. It could be harmless but people need to know what it is is.

“The white scum is all over the trees, foliage and the grass. I am concerned if it poses a risk to cows or wildlife.

“I haven’t see a white scum like this on the river bank in 37 years. It is a new phenomenon and it should be investigated.

“The EPA passed me straight on to Waterways Ireland and didn’t even discuss it.

“It doesn’t seem to be on Lough Derg so whatever happens took place downstream from Parteen Weir. What happened, was it some form of spillage?,” he asked.

Mr Byrnes recalled he spoke to a person in Waterways Ireland who referred him to Clare County Council and claimed when he discussed the issue with a local authority official she said their hands are tied because they are short staffed.

After the Clare Champion sent a number of press queries to different authorities, Mr Byrnes confirmed one of the council’s laboratory technicians took some samples of this substance from the river bank on Friday, April 24 and subsequent tests revealed it is a harmless natural phenomenon.

Senior council engineer, Cyril Feeney explained the algae is a non-toxic filamentous diatom called “Melosira”, which is very common in rivers and lakes, is pollution tolerant but can also be found in pristine waters.

“The council believe it is benign and is merely decaying algae left on the river bank as the river Shannon levels continue to fall. The algae would be initially green in colour but as the river level fell it has been left behind to dry out and effectively bleach in the fine weather we have had over the last two weeks.

“This algae scum is a feature in rivers, lakes and coastlines at the interface between the shore and the waterbody,” he said.

The consensus is that the white “paper” type residue, present at a small number of pockets in a back drain beside the River Shannon, is a result of deposition and subsequent drying-out of primarily a filamentous algae along with other recently deposited vegetative material along the river bank such as an accumulation of leaf litter, reeds, or plant matter with algae, detritus and silt.

This phenomenon of “algal-paper” is particularly associated with the drying out of turloughs and other temporary ponds.

“While it may develop in response to nutrient enrichment, it is not reported to be one of the widespread organisms that can occasionally excrete toxic metabolites.

“Landowners and farmers should contact their local Teagasc or agricultural advisor, who would be best placed to offer the best advice for the management of the grassland and livestock,” stated a Waterways Ireland spokeswoman.

While the EPA have an oversight role with regard to local authorities’ statutory environmental protection duties, a spokeswoman told the Clare Champion the council are the responsible authority in the first instance regarding this matter.

The spokeswoman confirmed the EPA did receive a complaint in relation to this matter via voicemail and email.

“An inspector spoke with the complainant and discussed the issue. The inspector advised that it would be the Environment Section of Clare County Council that would investigate such a concern.
Normal procedure is to provide contact information for the relevant authority, Clare County Council in this case during the call.

“The contact information for Clare County Council was provided in written form in the subsequent acknowledgment email that issued to the complainant.

“The EPA are not currently dealing with this matter as it is a local authority function to address it in the first instance,” she added.